By Brad Ericson, CPC, CPC-ORTHO
Ask coders what they do and how much they make, and their answers are as varied as how sensitive to the sun they are. Some are easy burners, with salaries and careers that show the results of outside forces quickly. Some are seemingly immune to the forces that buffet our careers. All in all, we’re doing pretty well; and, it appears that average salaries have increased more than 11 percent since our survey in 2007.

This year’s survey was completed by more coders than ever and conducted via the internet during July and August. Over 12,000 coders participated. Like trees in the sun, the information continues to bear fruit, but here are some highlights.
More than 45 percent of respondents bear titles indicating they are coding professionals. Those who coordinate, manage, or supervise billing make up 13 percent. Practice managers represent 10 percent of the survey while those who assure accuracy and compliance make up five percent of those responding to the survey. The remainders were consultants and a wide variety of other titles.
How qualified are we? A striking 89 percent of respondents have a CPC®, CPC-H®, CPC-P®, or CPC-A®. We are educated, too, as shown below:

Some of the results were surprising:

The average annual wage for a credentialed coder is $43,100, compared to $36,500 for a noncredentialed coder. But when we consider other factors, the complicated forces yield a surprisingly narrow range of results. Overall, the average range for most coders is $39,400 to $46,500.
The survey indicated that compensation differences result from several influences: employer, training, work sites, schedules, complexity of the coding being done, and geographical location. For example, business size impacts your average salary, certified or not. Those who work for larger employers tend to get paid more.

Average salaries by hour to use as a comparison are as follows:

Which Side Gets the Most Sun?

It’s no surprise that the specialty for which you code influences average salary levels. There are a lot of factors that impact your salary. But based on our data, the top five earners may surprise you.
1. Neuropsychiatry………………. $62,500
2. Rheumatology…………………. $57,800
3. Nephrology…………………….. $50,900
4. Plastic surgery…………………. $47,200
5. Interventional radiology……… $47,100
Wait! That can’t be right! We’ve always believed physicians paid coders based proportionally on what the physicians earned. Yet, according to our survey, the range of compensation for most specialties is within a few thousand dollars of their peers. Here are some examples in Table 1.

Our salaries prove to be as affected by our location as our exposure to the sun. Some states provide more sun to coders. Not only is this a function of cost of living and population, it results from the mix of workplaces and specialties that make up the coding workforces in a particular state. Regions rank by average salary Shown in Table 2.

Our respondents say productivity isn’t typically measured. Eighty-three percent of respondents aren’t required to meet productivity standards for coding from operative reports, and 85 percent don’t have to code a minimum number of evaluation and management visits.
We can present average benchmarks by specialty in those specialties where we received sufficient responses to be statistically accurate. While the data was not as voluminous as desired, below are a few specialties where we received enough responses on the benchmark standards for coding and billing operative reports per hour.

Your own work may vary from these, however, we believe we received enough responses to help assist your personal productivity goals.
As we learn more from this data, we will make it available. Whether you’re a starting or experienced coder, moving from one venue to another, or just curious about where you compare with the averages, this information is important.
“This information is very helpful to employers and coders,” AAPC CEO and President Reed Pew said. “I was surprised by some of it—for example, that the Atlantic region is the highest compensated region, and that for most specialties, the pay amounts were quite comparable. However, most important was the 18 percent difference between non-certified coders and certified coders and the increase in wages for coders since last year. It is our belief that employers that employ certified coders improve their accuracy of billings and cash flow and reduce their risk of audit by engaging certified coders; and by more than 18 percent. There is a solid return on investment for those that certify their coders.” Visit AAPC’s website for more information about this survey. 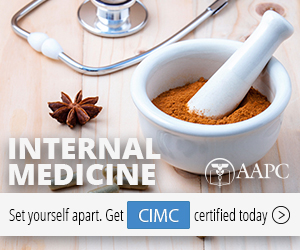