Ring in the New Year with Proper ASC Urology Coding

By Paul Cadorette, CPC, CPC-H, CPC-ORTHO, CPC-P, CPC-ASC
Mastering urology coding in an ambulatory surgical center (ASC) setting is a lot like preparing for the holidays: You want to remember the important details. And submitting claims is like exchanging gifts, you want to be sure it isn’t returned back to you. Whether you prepare a claim or you prepare for a holiday feast, there is usually a last minute change that you didn’t take into consideration. This year, you can stay current with the seasonal changes of ASC urology coding with this step-by-step guide.

Several new ICD-9-CM diagnosis codes appear for 2009. The first is the expansion of the hematuria diagnosis code to the fifth digit.
There are two forms of hematuria, or blood in urine: Gross hematuria, where the blood can be seen with the naked eye, and microscopic hematuria, where the blood is only identifiable under microscopic examination. To differentiate the two types of hematuria, diagnosis code 599.7 Other disorders of urethra and urinary tract; hematuria was expanded to a fifth digit subclassification.
The same holds true for diagnosis code 788.9 Other abnormality of urination; other symptoms involving urinary system, where a fifth digit of “1” is now necessary to identify functional urinary incontinence. With functional incontinence, the patient doesn’t have the usual problems associated with the urinary anatomy, such as a weak bladder or obstruction. They do have other physical or mental conditions that attribute to their incontinence. An example of physical incontinence is someone with severe hand arthritis who can’t undress in time to urinate. Mental conditions that appear in diseases like Parkinson’s or Alzheimer’s inhibit an individual’s ability to realize the need for urination.

A common ASC setting procedure for diagnosing urinary symptoms is a cystoscopy. This procedure is the insertion of an endoscope through the urethra for visualizing the bladder. When it comes to reporting bilateral procedures, it’s important to recognize the difference between American Medical Association (AMA) and Centers for Medicare & Medicaid Services (CMS) guidelines.
The best resource for AMA guidelines relating to modifier 50 Bilateral procedure usage is the May 2001 CPT® Assistant, which defines the codes considered inherently bilateral, the codes which may be appended with modifier 50, and the codes with unilateral or bilateral included as part of the code descriptor.
For Medicare beneficiaries, use the Correct Coding Initiative (CCI) edits. CPT® code 52005 Cystourethroscopy, with ureteral catheterization, with or without irrigation, instillation, or ureteropyelography, exclusive of radiologic service; is a code the AMA allows to report as a bilateral procedure. The CCI edits, however, use an indicator of “0” with modifier 50 indicating a bilateral procedure payment adjustments would not apply. If you do report a bilateral procedure for ASC facility fees reimbursement, review the new CMS guidelines found in MLN Matters® Number SE0742, which states, “Bilateral procedures should be reported as a single unit on two separate lines or with ‘2’ in the units field on one line.” Use this method of billing to ensure proper payment for both procedures.

There are additional coding conventions making urology coding very challenging. When bladder dilation is performed for interstitial cystitis, report CPT® code 52260 Cystourethroscopy, with dilation of bladder for interstitial cystitis, general or conduction (spinal) anesthesia. Without a diagnosis of interstitial cystitis, report the dilation procedure with 52000 Cystourethroscopy (separate procedure). Because there are separate CPT® codes for general/spinal anesthesia usage versus local anesthesia usage, you should determine the type of anesthesia used. Do not report 53899 Unlisted procedure, urinary system, per the Oct. 05 CPT® Assistant.
52204-52240
The next set of CPT® codes, 52204-52240, has descriptors using the terminology “biopsy(s) or lesion(s),” indicating if multiple biopsies or lesion excisions occur during an operative session, the CPT® code should only be reported one time even when performed on different lesions. There are, however, a couple of scenarios that may allow for reporting of multiple services:
A biopsy of the bladder wall and treatment of a medium bladder tumor.
Treatment of a minor lesion and resection of three large bladder tumors.
Remember: It’s appropriate to report one CPT® code for each different category of bladder tumors based on their size; small, medium, or large. See CPT® code descriptors for sizes.
“Fulguration” is another term used in this code set that has different applications. When a biopsy is performed and the site is fulgurated to control bleeding, report a biopsy code. If the fulguration is performed as a destructive treatment to ablate the lesion, report 52214-52240, as appropriate to the size of the lesion.

Insertion of a temporary catheter into the ureter  is considered inclusive to all of your cystoscopy procedures. When an indwelling stent as described by CPT® code 52332 Cystourethroscopy, with insertion of indwelling ureteral stent (eg, Gibbons or double-J type) is inserted during a procedure and left in place, it is additionally reported. As of April 1, 2007, code 52332 was dropped as a bundled service with other cystoscopy codes, so it is unnecessary to append modifier 59 Distinct Procedural Service.
Report CPT® code 52310 Cystourethroscopy, with removal of foreign body, calculus, or ureteral stent from urethra or bladder for removal of an indwelling stent. Ureteral stent removal from the bladder is done via a wire attached to the stent called a pigtail. The pigtail is threaded down through the ureter and into the bladder so that during the removal process the physician only has to grasp the wire and pull to remove the stent.
When performing procedures on the ureters, CPT® code selection is based on the endoscopy scope(s) used. You can perform the standard cystourethroscopy for the removal, manipulation, or fragmentation of ureteral calculus. Choose a code from the 52320-52343 code range for these procedures, described as:
Removal—Stone is small enough to extract whole using basket forceps.
Manipulation—Depending on the location of the stone within the ureter it may be manipulated by pushing it back into the kidney, or by pulling it into the bladder to unclog the ureter. Simultaneous lithotripsy may be performed, or the stone can be left for treatment at a later date.
Fragmentation—Different techniques include ultrasonic, electrohydraulic, holmium laser, or extracorporeal shock wave lithotripsy (ESWL).
When it’s necessary to visualize the ureters, a cystourethroscopy and an ureteroscopy (smaller scope) are used. Move over to the CPT® code range 52351-52355 Cystourethroscopy with ureteroscopy and/or pyeloscopy for these procedures. They are comprised of the dilation procedures and removal, manipulation, and lithotripsy of ureteral calculus.

Pass on the Good Cheer

The repetitive nature of the code sets can cause frustration for some coders. Remember to start with the anatomical location, and then recognize which type of endoscope is used. After you’ve selected your CPT® code(s), consider the appropriate modifier guidelines, depending on the payer. Keep in mind, there are many times when multiple surgical procedures are performed during one surgical session. Consult the CCI edits for any bundling issues. 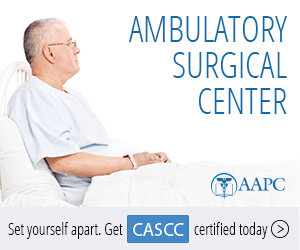