Stage 1
A patient is scheduled for mastectomy by her oncologic surgeon. As part of reconstruction, the surgeon marks the patient’s midline, inframammary fold, lateral mammary fold, and planned skin excision. Following mastectomy, the pectoralis major muscle is elevated from the chest wall using electrocautery. Care must be taken not to disturb surrounding muscles, such as the pectoralis minor, serratus, and rectus abdominis muscles; although, part of the inferomedial pectoral muscle may be released for better placement of the expander-implant.
A dermal allograft-alloderm is reconstituted, prepared, and placed. The graft is fashioned into an extension of the pectoral muscle pocket. A sterile tissue expander is prepared and placed under the muscle/alloderm pocket and filled with sterile normal saline. Drains are placed and skin flaps are meticulously closed.
Most patients are discharged on the same day, or the day after, surgery. Serial expansion begins in the office after the surgical incision has healed (usually, two to three weeks), and normally continues for four to six weeks.
This portion of the reconstruction is reported with CPT® 19357 Breast reconstruction, immediate or delayed, with tissue expander, including subsequent expansion and 15777 Implantation of biologic implant (eg, acellular dermal matrix) for soft tissue reinforcement (eg, breast, trunk) (List separately in addition to code for primary procedure). If these procedures occur bilaterally, append modifier 50 Bilateral procedure.
Stage 2
When expansion is complete, the patient is scheduled for removal of the expander and placement of a silicone gel implant. A separate inframammary incision is done to remove the expander, and minor modifications of the pocket may be necessary to exchange the expander and gel implant.
This stage of the procedure is reported with CPT® 11970 Replacement of tissue expander with permanent prosthesis.
Stage 3
This stage includes nipple reconstruction/creation of the nipple bud with flaps (19350 Nipple/areola reconstruction) and areola tattooing (11920-11922), depending on the area tattooed:

Breast reconstruction using tissue expanders or implants is one of the most commonly used procedures. Complications such as implant rippling, malpositioning of implant, and capsule contracture may occur. Complications are usually handled as secondary procedures. The most common procedure codes are 19380 Revision of reconstructed breast and 19371 Periprosthetic capsulectomy, breast. 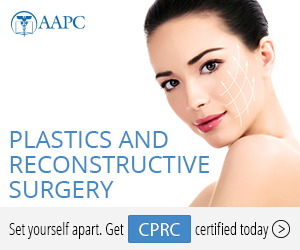 What the Future May Hold

There have been recent reports of one-stage breast reconstruction without the use of expanders. Acellular dermis has been used in thousands of surgical patients. In breast reconstruction, it acts as a scaffold for cellular ingrowth and revascularization. There is minimal fibrosis or contracture, and the acellular dermis allows rapid expansion, less pain during expansion, fullness to the lower pole of the breast, and reduced need for reoperation procedures. It has also been shown to withstand radiation therapy quite well with minimal side effects to implant reconstruction. The advent of skin and nipple sparing mastectomy, along with the use of dermal allografts, has made direct implant immediate breast reconstruction feasible.
Govind Acharya, MD, FACS, is board certified in plastic surgery and a member of the American Society of Plastic Surgeons, American Society of Aesthetic Plastic Surgery, a Fellow of American College of Surgeons, and a member of the clinical teaching faculty at the Mayo Clinic, Ariz. He has more than 30 years in practice, and works in private practice in Phoenix, Ariz.