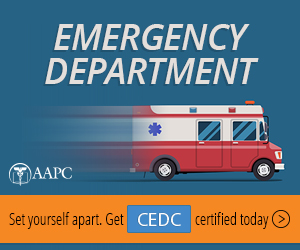 In most circumstances, you would not code separately for suture removal. There isn’t a dedicated CPT® code for suture removal, and both the American Medical Association (AMA) and the Centers for Medicare & Medicaid Services (CMS) consider suture removal to be an integral part of any procedure that includes suture placement.
For example, if a physician performs layered closure of a 3.5-cm laceration on a patient’s face, and nine days later removes the sutures, the removal is included in the 10-day global package of the repair code (12052 Repair, intermediate, wounds of face, ears, eyelids, nose, lips and/or mucous membranes; 2.6-5.0 cm).
Exceptions to the Rule
In some cases, however, you may be able to report suture removal separately. For example:
1. A different physician removes the sutures than who placed the sutures.
When this occurs, you have the option of reporting the same code that described the initial procedure and appending modifier 55 Postoperative management only. Postoperative care usually accounts for approximately 10 percent of the procedure’s value.
Returning to our example above, suppose an emergency department (ED) physician performed the wound repair (12052), but the patient’s primary care physician (PCP) removed the sutures at a later date. In an ideal world, the PCP would report 12052-55 for postoperative care (including suture removal).
Because the world is far from ideal, however, several problems may arise in this scenario. Not only would the physician providing postoperative care need to know exactly which CPT® code was reported by the physician who provided surgical care, but the physician providing surgical care also would have needed the foresight to report his services with modifier 54 Surgical care only appended to the procedure code. In other words, the physician providing surgical care and the physician providing postoperative care would have to coordinate their billing because the payer will not pay twice for the postoperative portion of the service.
An alternative tactic is to report a low-level evaluation and management (E/M) service for a problem-focused visit, especially when suture removal occurs outside of the global period. As always, documentation must support medical necessity for the visit.
2. Sutures are removed under anesthesia.
This circumstance is rare, but when documented and supported by medical necessity, you may report 15850 Removal of sutures under anesthesia (other than local), same surgeon or 15851 Removal of sutures under anesthesia (other than local), other surgeon, depending on whether the same surgeon who performed the initial procedure, or a different surgeon, removed the sutures.
3. Your payer accepts S codes.
Some private payers (but not Medicare) may accept S0630 Removal of sutures by a physician other than the physician who originally closed the wound for suture removal, as long as the physician who removes the sutures isn’t the physician who placed them.
In any case, when suture removal is the primary reason for the patient encounter, report V58.3 Encounter for other and unspecified procedures and aftercare; attention to surgical dressings and sutures as the first-listed diagnosis.
G.J. Verhovshek, MA, CPC, is managing editor at AAPC.

No Responses to “Three Solutions for Suture Removal”