In medicine—and equally so in medical coding—location matters. As such, physician coders must be adept when applying the three modifiers most commonly used to identify more precisely the locations at which a procedure occur: Modifiers 50 Bilateral procedure, LT Left side, and RT Right side.

Mirror Image Procedures on a Single Structure Call for 50

A bilateral procedure occurs on both sides of a single, symmetrical structure or organ. For example, the spine is a single, symmetrical structure (that is, the left and right sides mirror one another). A spinal laminotomy (such as 63020-63044), for instance, may occur on either side of the spine or, if required, on both sides of the spine at the same level(s). The same also is true of spinal facet joint injections (64490-64496), among other procedures.
In other cases, the term bilateral surgery may apply to procedures performed on each of a pair of structures. For example, the eyelids are paired structures (there is a right eyelid and a left eyelid), as are the breasts, and so on. Various hernia repair procedures also are said to occur bilaterally.
CPT® provides modifier 50 to identify bilateral procedures not described specifically by an individual CPT® code.
For example, CPT® designates 27158 Osteotomy, pelvis, bilateral (eg, congenital malformation) as a bilateral procedure and, as such, this code does not require modifier 50 (another modifier may be required to identify a designated bilateral procedure that occurs unilaterally, however; this is discussed below).
In contrast, codes describing spinal laminotomy (as discussed above) are unilateral (single-sided) by definition. Meaning, if a neurosurgeon performs a bilateral cervical laminotomy, append modifier 50 to the appropriate CPT® procedure code, 63020 Laminotomy (hemilaminectomy), with decompression of nerve root(s), including partial facetectomy, foraminotomy and/or excision of herniated intervertebral disc, including open and endoscopically-assisted approaches; 1 interspace, cervical.

Not All Codes Accept Modifier 50

Not every procedure can be performed bilaterally, and some codes are bilateral by definition. For this reason, modifier 50 can only be appended to specific CPT® codes.
Most coding and billing software will identify those codes eligible for modifier 50, but this information also is specified in the Medicare Physician Fee Schedule (MPFS). The MPFS file is a free download from the Centers for Medicaid & Medicare Services (CMS) website (www.cms.hhs.gov/PhysicianFeeSched/PFSRVF/list.asp?listpage=4); be sure to download the most-recently posted file for up-to-date information.
Within the MPFS, the “BILAT SURG” column lists a modifier indicator. Only procedures with a “1” modifier indicator in the BILAT SURG column should be reported using modifier 50 to identify bilateral procedures. A “2” modifier indicator identifies procedures that are bilateral by definition, or a separate code exists to report the bilateral procedure; a “0” indicator describes procedures that, due to anatomy, cannot be bilateral, and; a “9” indicator means the bilateral concept does not apply.

For Medicare payers, and many third-party payers, as well, appending modifier 50 correctly will increase reimbursement to 150 percent of the allowable fee schedule payment.
For example, a dermatologist excises a single benign tumor from both the left and the right breast, as described by 19120 Excision of cyst, fibroadenoma, or other benign or malignant tumor, aberrant breast tissue, duct lesion, nipple or areolar lesion (except 19300), open, male or female, 1 or more lesions. The MPFS Relative Value File shows a 1 modifier indicator in the BILAT SURG column for this code, making use of modifier 50 appropriate to describe a bilateral procedure.
Code 19120 is valued at 5.92 physician work relative value units (RVUs). For Medicare, appending modifier 50 appropriately will raise this value by half, to a total of 8.88 physician work RVUs. 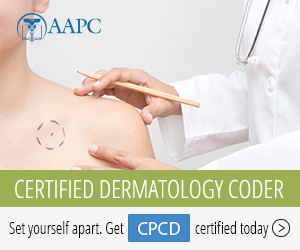 Unlike modifier 50, modifiers LT and RT are information only modifiers and they do not affect RVUs. Perhaps for that reason, the rules for applying modifiers LT and RT are not stringently defined. For example, the MPFS Relative Value File does not provide guidance for applying modifiers LT and RT, as it does for modifier 50. Modifiers LT and RT do affect payment, however, by providing the payer with added detail necessary to approve reimbursement.
Modifiers LT and RT differentiate those procedures performed on paired structures such as eyes, lungs, arms, breasts, knees, etc.
As an example, a surgeon may perform an excision (19120) from the left breast and a needle core biopsy (19100 Biopsy of breast; percutaneous, needle core, not using imaging guidance (separate procedure)) on the right breast. Excision includes biopsy at the same location
(unless further excision was prompted specifically by biopsy results). In this case, however, the procedures occur at different locations. You may report the procedures separately using 19120-LT and 19100-RT. Use of the LT/RT modifiers demonstrates distinct locations. (Note, however, some payers also may require modifier 59 Distinct procedural service to be appended to 19100, in the primary position.)
Or, an orthopaedic surgeon scopes one compartment of the left knee, and a separate compartment in the right knee. Once again, using LT/RT will help differentiate the procedures and provide necessary detail that may prevent the payer from bundling the procedures inappropriately.
Modifiers LT and RT also are useful when describing cases when a provider unilaterally performs a procedure that CPT® defines as bilateral (although such cases are rare). For example, 58953 Bilateral salpingo-oophorectomy with omentectomy, total abdominal hysterectomy and radical dissection for debulking is by definition a bilateral procedure. If the procedure occurs on the right side only, however, appropriate coding is 58953 with modifier 52 Reduced procedure, and modifier RT to specify location.
Finally, modifiers LT and RT may be used to provide location-specific information for services defined either as unilateral or bilateral, such as ablation of soft tissue codes 30801-30802. For instance, G0268 Removal of impacted cerumen (one or both ears) by physician on same date of service as audiologic function testing may be either a unilateral or bilateral service. If the physician removes cerumen from the left ear only, report G0268-LT. There is no need to append modifier 52 in this case, because the service is defined as either “one or both” ears, and is not considered “reduced” when performed in one ear only.
G. John Verhovshek, MA, CPC, is AAPC’s director of clinical coding communications.

3 Responses to “Left, Right, or Bilateral?”