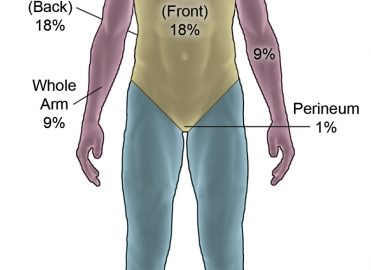 Look for three things in the documentation to accurately report encounters in ICD-9-CM and ICD-10-CM.

According to the American Burn Association, an estimated 486,000 hospital admissions and visits to hospital emergency departments occur annually for burn evaluation and treatment in the United States. An estimated 30,000 more individuals are hospitalized at burn centers for treatment of burn injuries every year.
When selecting diagnosis codes for burns, the guidelines in both ICD-9-CM and ICD-10-CM direct you to consider the anatomical location of the burn, the severity of the burn, and the cause of the burn.
Guidelines for Classifying Burns
Unlike the ICD-9-CM code set, ICD-10-CM differentiates between burns and corrosions. ICD-10-CM burn codes describe thermal burns caused by a heat source, such as a fire, and burns resulting from electricity or radiation. ICD-10-CM corrosion codes describe burns caused by chemicals, such as battery acid. The ICD-10-CM guidelines are the same for both burns and corrosions, and mirror the burn guidelines in ICD-9-CM.

Many patients suffer from burns in multiple anatomical locations. When coding these cases:

Example: A patient presents to the emergency department after being burned in a house fire. The emergency department physician’s documentation indicates the patient has first-, second-, and third-degree burns on his upper back, first- and second-degree burns on his left palm, and second- and third-degree burns on his left upper arm.
In ICD-9-CM, appropriate coding is:
942.34 Full-thickness skin loss [third degree, not otherwise specified] of back [any part]
943.33 Full-thickness skin loss [third degree, not otherwise specified] of upper arm
944.25 Blisters, epidermal loss [second degree] of palm
In ICD-10-CM, appropriate coding is:
T21.33XA Burn of third degree of upper back, initial encounter
T22.332A Burn of third degree of left upper arm, initial encounter
T23.252A Burn of second degree of left palm, initial encounter
Burns Classified According to Extent
Both ICD-9-CM and ICD-10-CM guidelines address coding burns classified according to the extent of body surface involved. In ICD-9-CM, the codes under 948 Burns classified according to extent of body surface involved are used. In ICD-10-CM, the codes under T31 Burns classified according to extent of body surface involved or T32 Corrosions classified according to extent of body surface involved are used.
Report these codes when the provider doesn’t specify the site of the patient’s burns in the medical record, or when there is a need for additional data. Burn units often accumulate this data to evaluate burn mortality. The guidelines also suggest using these codes when there is mention in the documentation of a third-degree burn involving 20 percent or more of the body surface area.
These codes are based on the classic “rule of nines” (as shown in the Rule of Nines Burn Percentages figure) in estimating body surface involved. Body areas are measured in increments of 9 percent.
In ICD-9-CM, the fourth digit identifies the percentage of total body surface with all degrees of burns. The fifth digit identifies the percentage of the patient’s body surface with third-degree burns. Although a table of fifth digit options is not provided in ICD-10-CM, the codes follow the same general pattern as ICD-9-CM.
Example: A patient has burns on 75 percent of his body surface. Approximately 1/3 (33 percent) of his body surface has third-degree burns.
In ICD-9-CM, appropriate coding is:
948.73 Burn [any degree] involving 70-79 percent of body surface with third degree burn, 30-39%
In ICD-10-CM, appropriate coding is:
T31.73 Burns involving 70-79% of body surface with 30-39% third-degree burns
External Cause Codes
Both ICD-9-CM and ICD-10-CM guidelines recommend reporting appropriate external cause codes for burn patients. Not all payers accept these codes, however.
Example: A young man who was severely burned during an extensive, uncontrolled fire at the factory where he works was seen at the emergency room for evaluation. Investigators are unable to determine the cause of the fire.
Appropriate ICD-9-CM codes are:
E891.3 Burning caused by conflagration in other and unspecified building or structure
E988.1 Injury by burns or fire, undetermined whether accidentally or purposefully inflicted
E849.3 Accidents occurring in industrial places and premises
E000.0 Civilian activity done for income or pay
Appropriate ICD-10-CM codes are:
X00.0XXA Exposure to flames in uncontrolled fire in building or structure, initial encounter
Y26.XXXA Exposure to smoke, fire and flames, undetermined intent, initial encounter
Y92.63 Factory as the place of occurrence of the external cause
Y99.0 Civilian activity done for income or pay
With the high volume of burns occurring on an annual basis, it’s important for you to understand the guidelines for coding these injuries. When documentation lacks the details necessary for you to code with the utmost specificity, query the provider.

Nancy Higgins, CPC, CPC-I, CIRCC, CPMA, CEMC, is the manager of the surgical coders for the Carolinas HealthCare System Medical Group. She is a past president of the Charlotte, N.C., local chapter and was awarded AAPC’s Coder of the Year award for 2009.

One Response to “Dual Dx Coding for Burns”