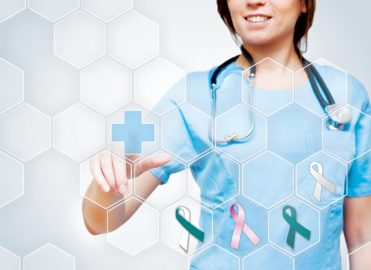 Screening recommendations continue to change for cancers and osteoporosis in women.

Preventive care has been a moving target in the past few years. The number of possible screening tests, who should be screened, how often, and with which test seem to change every few months. Here are the latest recommendations for women’s health screening tests for cervical, breast, and ovarian cancers, and osteoporosis.
Cervical Cancer Screening
The Papanicolaou test (Pap smear) is a common screening for cervical cancer. The U.S. Preventive Services Task Force (USPSTF), the American Congress of Obstetrics and Gynecology (ACOG), and the American Cancer Society (ACS) agree screening should start at age 21 and occur every three years for women aged 21 years and over, and every three to five years for women over 30 who do not have a recent history of an abnormal test.
The appropriate test for the under 30 group is the Pap smear (slide or thin prep), with testing for human papillomavirus (HPV) only in certain cases of abnormal results (reflex to HPV). Women over 30 can be screened the same as younger women with the Pap with reflex to HPV every three years, or with Pap and HPV testing at the same time (co-testing). If the later screening test is done, and the results of both tests are negative, tests should be repeated no more than every five years. Cervical cancer screening stops at age 65 or with a hysterectomy for any cause not related to abnormal cells.
Breast Cancer Screening
Breast cancer screening for low-risk women (no breast cancer gene mutations) has traditionally been done using three modalities:

BSE means a woman is taught to examine her own breasts regularly to detect changes, which she reports to her doctor or provider. BSE  is widely taught and is still recommended by many organizations working to educate about breast cancer; however, this method of detection has been found in studies to result in many false positives, to create anxiety, and to result in invasive procedures while failing to detect more cancers than other screening tools. The ACS continues to recommend BSE as an option. The USPSTF and ACOG no longer recommend it. ACOG describes “breast awareness,” whereby a woman is familiar with the contours of her own breasts so she can report changes to her provider.
A CBE is performed by a qualified healthcare professional. Studies show a small increase in cancer detection over no screening or mammogram alone. ACOG and the ACS recommend CBE every one to three years for women aged 20-39, and annually for women over 40. The USPSTF finds insufficient evidence to recommend for or against CBE.
Mammography uses X-ray with low-dose radiation to detect patterns of calcifications that can indicate cancer cells. In the United States, it’s recommended annually for women over age 40. This recommendation has come under fire recently because research data does not strongly show a mortality benefit for women screened in their 40s. In addition, normal breast physiology causes many false results (negative and positive), leading to many invasive procedures (not to mention anxiety) for benign findings. Finally, there is a small but non-trivial issue of over-diagnosis and treatment.
Mammography is great at finding very small cancers. Studies show many of these cancers would do no harm for years (if at all); yet women are treated with surgery, radiation, and/or chemotherapy. USPSTF 2009 recommendations (which, you may recall, created great controversy when they were released) are still listed as “update in progress.” They recommend biennial screening for women 50-75 and individualization of screening for women 40-50 (e.g., based on the patient’s personal risk factors). ACOG and the ACS continue to recommend annual screening with mammogram for women over 40. Newer modalities such as magnetic resonance imaging, 3D mammography, and thermography are not included in recommendations due to insufficient data.
Ovarian Cancer Screening
A sensitive and specific screening test for ovarian cancer remains elusive. Combinations of blood tests and blood tests with pelvic ultrasound have been studied, but none have been able to detect early ovarian cancer with sufficient accuracy to be useful as a screening test for asymptomatic women. ACOG recommends pelvic ultrasound and CA-125 only to evaluate women who have persistent or progressive symptoms such as bloating, feeling full quickly, or pelvic pain, or for women at high risk due to genetic mutation or family history. The USPSTF recommends against screening for ovarian cancer.
Osteoporosis Screening
Because women lose bone rapidly after menopause, screening for osteoporosis typically starts after menopause and is conducted every two years using a bone density test. With the average age of menopause beginning at 51, this has resulted in many diagnoses of thin bones (osteopenia or osteoporosis) in fairly young women, with subsequent long-term pharmacologic treatment for many of these women. In 2011, the USPSTF updated its guidelines to recommend bone density screening for women over age 65 only, with women under 65 to be screened only if they have factors that increase their risk of fracture to that of a 65-year-old woman. ACOG mirrored these guidelines in its updated recommendations in 2012.
As scientific data accumulates and new modalities develop, the landscape of screening recommendations continues to change. Stay tuned.

Sharon Thompson, MD, MPH, FACOG, is a practicing ob/gyn at Central Phoenix Obstetrics and Gynecology in Phoenix Arizona. She received a Bachelor of Arts in Biology from Vassar College and a master’s degree in Public Health from the University of California at Berkeley. After medical school at Mount Sinai School of Medicine in New York City, she did her residency in obstetrics and gynecology at the Harvard-affiliated integrated Brigham and Women’s and Massachusetts General Hospital residency program.