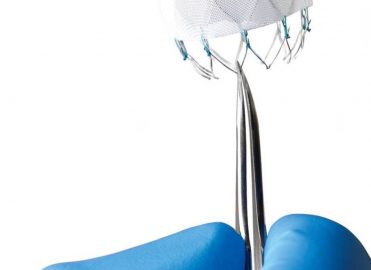 The Centers for Medicare & Medicaid Services (CMS) on November 10 issued a proposed decision memo regarding national coverage for percutaneous left atrial appendage closure (LAAC). The agency is proposing not to cover LAAC therapy using an implanted device due to lack of evidence supporting medical necessity.
This proposal contradicts a study published in the November 19, 2014 issue of JAMA, the Journal of the American Medical Association, which concluded, “After 3.8 years of follow-up among patients with nonvalvular AF [atrial fibrillation] at elevated risk for stroke, percutaneous LAA closure met criteria for both noninferiority and superiority, compared with warfarin, for preventing the combined outcome of stroke, systemic embolism, and cardiovascular death, as well as superiority for cardiovascular and all-cause mortality.” Unfortunately, no percutaneous LAAC device has FDA approval—which is the crux of the matter.
The left atrial appendage is a small, ear-shaped sac in the muscle wall of the left atrium (top left chamber of the heart). In normal hearts, the heart contracts with each heartbeat, and the blood in the left atrium and LAA is squeezed out of the left atrium into the left ventricle (bottom left chamber of the heart).
Cleveland Clinic explains:

When a patient has atrial fibrillation, the electrical impulses that control the heartbeat do not travel in an orderly fashion through the heart. Instead, many impulses begin at the same time and spread through the atria. The fast and chaotic impulses do not give the atria time to contract and/or effectively squeeze blood into the ventricles. Because the LAA is a little pouch, blood collects there and can form clots in the LAA and atria. When blood clots are pumped out of the heart, they can cause a stroke.

Standard treatment for AF is prescribing a blood thinner such as warfarin (Coumadin). Alternatively, a physician may recommend LAAC to seal off the LAA, which can reduce the risk of stroke and eliminate the need for blood-thinning medication.
To support evidence development for technologies that may benefit Medicare beneficiaries, CMS is proposing coverage limited to items and services in clinical studies. Under the proposed decision, Medicare would cover percutaneous LAAC therapy for patients with non-valvular atrial fibrillation only, when conditions are met.
It’s interesting that CMS specified coverage for “non-valvular AF” only, as the term is somewhat of a misnomer. According to an Elsevier article published October 2015 on PubMed.gov:

The distinction between ‘valvular’ and ‘non-valvular’ AF remains a matter of debate. … As long as there is no better new term or widely accepted definition, ‘valvular AF’ refers to patients with mitral stenosis or artificial heart valves. Patients with ‘non-valvular AF’ may have other types of valvular heart disease.

About Renee Dustman Has 762 Posts