Know Your Knee Anatomy to Code with Confidence 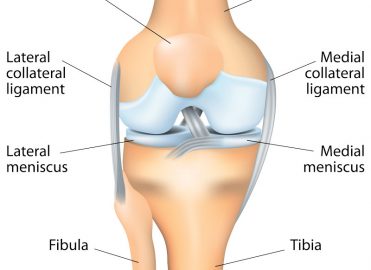 The human knee includes four bones and three separate “compartments.” The bones are:

The tibiofemoral joint, which is the main hinge joint of the knee, occurs where the femur meets the tibia, and includes an inner (medial) compartment and an outer (lateral) compartment. The patellofemoral joint occurs where the patella and the femur meet (behind the kneecap), and comprises the third compartment of the knee.
Pay careful attention to CPT® code descriptors for knee procedures; they may specify which compartments are addressed during the procedure. For example:
29876 Arthroscopy, knee, surgical; synovectomy, major, 2 or more compartments (eg, medial or lateral)
29881 Arthroscopy, knee, surgical; with meniscectomy (medial OR lateral, including any meniscal shaving) including debridement/shaving of articular cartilage (chondroplasty), same or separate compartment(s), when performed
29883 Arthroscopy, knee, surgical; with meniscus repair (medial AND lateral)
In some cases, the three compartments of the knee may be treated as separate anatomic areas — whereby procedures in different compartments of the same knee may be billed separately, but procedures performed in the same compartment may be bundled. For example, per CPT® Assistant (August 2001):
… if a knee arthroscopy for removal of loose or foreign bodies (29874) is performed in the same knee compartment as procedures described by codes 29875-29881, then code 29874 should not be reported separately as this is considered to be an inclusive component of codes 29875-29881.
However, if a knee arthroscopy for removal of loose or foreign bodies (29874) is performed in a different knee compartment as the knee arthroscopy procedure codes 29875-29881, then code 29874 may be reported separately with modifier -59, Distinct Procedural Service, appended. For example, when smoothing down the cartilage and/or drilling holes to create microfractures is also performed in addition to removal of foreign bodies or loose bodies of the bone or cartilage within the knee joint, code 29879 may be reported in addition to code 29874 only if performed in a separate knee compartment. Modifier -59 should be appended to indicate that a separate compartment was involved.
In other cases, it doesn’t matter whether a procedure occurs in the same or a different compartment(s) of the knee. One example, per CPT® Assistant (May 2014), occurs when reporting limited synovectomy (29875 Arthroscopy, knee, surgical; synovectomy, limited (eg, plica or shelf resection) (separate procedure):
Question: A patient had a medial compartment meniscectomy (29881) and a lateral compartment synovectomy (29875), and both procedures were performed in different compartments of the knee. Would it be appropriate to separately report these procedures?
Answer: No. Code 29875, which describes limited synovectomy, is for a separate procedure. This means that the work associated with this procedure is inclusive to more extensive procedures performed in the same anatomic site (the knee), and is not separately reportable if other arthroscopic knee procedure is performed on the same knee in the same session. This code should only be reported if it is the only procedure performed; separate compartment rules do not apply. Code 29875 is a separate procedure and is not reported with code 29881 when performed.

John Verhovshek, MA, CPC, is managing editor at AAPC and a member of the Hendersonville-Asheville, N.C., local chapter.

No Responses to “Know Your Knee Anatomy to Code with Confidence”