What the Value-based Payment Modifier Means for Your Practice 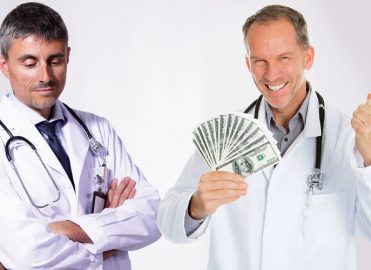 Determine how the program will affect your practice.

The Centers for Medicare & Medicaid Services (CMS) is slowly implementing the value-based payment modifier, starting with groups that include 100 or more eligible professionals (EPs) and working down to solo practitioners. Providers who deliver high-quality care at a low cost will be eligible for a positive reimbursement adjustment, while providers who deliver low quality care and high costs will be subject to significant negative adjustments.
The value-based payment modifier stems from the 2010 Patient Protection and Affordable Care Act (ACA), which mandates that the U.S. Department of Health & Human Services establish a system to provide tiered payments under the Medicare Physician Fee Schedule. Payment tiers are determined by comparing the quality of care to the cost of the care provided to Medicare fee-for-service patients during the performance period.
Group Size Determines Effect on EPs
Although the penalty or bonuses initially will be applied only to physician payments, Medicare counts all EPs — including non-physician practitioners such as physician assistants and nurse practitioners — when determining the size of the group. The list of EPs is determined by pulling enrollment information maintained in Medicare’s Provider Enrollment, Chain and Ownership System (PECOS). Medicare compares the list of enrolled EPs to the claims data for the performance year, and any EPs who did not submit claims during the performance year are excluded from the total used to determine group size. The implementation schedule is:
100+ EPs
The value-based payment modifier went into effect for groups with 100 or more EPs starting in 2015. The data determining the modifier is based on the performance of the providers in 2013. Groups that failed to report Physician Quality Reporting System (PQRS) measures in 2013 automatically received a penalty of -1.0 percent. Groups that successfully reported PQRS measures in 2013 were given the option of whether they wanted to participate in quality tiering.
Groups that successfully reported PQRS measures in 2013, but did not elect to participate in quality tiering, did not have their payments adjusted. Note that 2013 is the only year groups could elect to participate in quality tiering. Groups that chose to participate in quality tiering will receive adjusted (upward, downward, or neutral) payments based on their performance compared to their peers. In 2016, the value-based modifier for these groups is based on 2014 PQRS data. Providers who did not report PQRS measures in 2014, or who failed to meet the requirements, will receive an automatic -2.0 percent adjustment in payments. In 2017, these groups could see adjustments as great as -4.0 percent.
10-99 EPs
The implementation of the value-based payment modifier for groups with 10-99 EPs begins in 2016 and is based on PQRS data from 2014. Groups that did not report PQRS measures, or failed to meet the requirements, will receive an automatic -2.0 percent adjustment.
Groups that successfully reported PQRS measures in 2014 will be eligible for an upward adjustment or their payments will remain neutral, based on quality tiering. There will be no downward adjustments based on quality in 2016. Starting in 2017, these groups will be eligible for negative adjustments based on their quality scores from data in 2015. The biggest negative adjustment possible in 2017 is -4.0 percent.
2-9 EPs, Solo Practitioners
The value-based payment modifier will be applied to groups of 2-9 EPs starting in 2017, based on PQRS data from 2015. Any groups of 2-9 EPs or solo practitioners that failed to report PQRS measures will receive an automatic adjustment of -2.0 percent. Groups that successfully reported in 2015 will not be subject to any downward payment adjustments in 2017, but will have their results tiered so their payments are either increased or remain neutral, based on performance compared to their peers.
VBM’s Effect on Payments
The only fixed number for each year is the percentage of the penalty. All potential increases in payment are expressed with an x (e.g., +2.0x). The reason is that the Value-based Payment Modifier Program must be budget neutral, which means that the total amount paid out in upward adjustments cannot exceed the total amount Medicare reduces payments for the providers receiving a penalty. The number of groups receiving the penalty cannot be determined until after the close of the reporting period the value-based payment modifier will be based on. After CMS determines how many groups will receive the penalty, it can calculate how much money will be available for incentives and will assign x a value.

* x is the adjustment factor. CMS cannot determine the value of x until the performance year ends and the number of participants who will receive the penalty is determined. The number of penalties will determine how much money is available to be paid in upward adjustments.
Bottom Line
CMS is promoting participation in its incentive programs by making sure the penalties for failing to participate are too big to ignore. The data released for the 2015 value-based modifier shows just how the program can affect a practice.
In 2013: