The Latest on Multianalyte Assays with Algorithmic Analyses 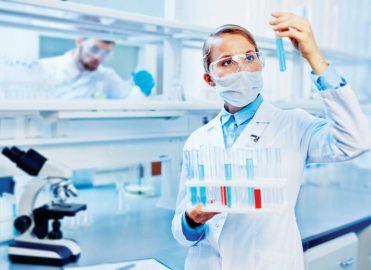 Look to brand names and parenthetical instructions when coding these procedures.

When coding for multianalyte assays with algorithmic analyses (MAAA), it may help to know the brand name of the test(s) performed; and when applying the MAAA codes (CPT® 81490-81599), be careful to heed all CPT® parenthetical instructions.

An analyte is “a chemical substance that is the subject of a chemical analysis,” and an assay is “analysis (as of an ore or drug) to determine the presence, absence, or quantity of one or more components” (per Merriam-Webster). MAAA involves the analysis of various materials, the results of which are used to assign a numeric value. That value measures, for instance, the activity of a given disease or a patient’s risk of a particular disease.
For example, CPT® Changes 2016: An Insider’s View tells us that 81490 Autoimmune (rheumatoid arthritis), analysis of 12 biomarkers using immunoassays, utilizing serum, prognostic algorithm reported as a disease activity score (a new code in 2016), “may be performed in adults with rheumatoid arthritis to quantify disease activity. The result, a disease-activity score, may help predict risk for subsequent joint damage in patients with arthritis.”
In the Pathology and Laboratory section of CPT®, guidelines under subsection Multianalyte Assays with Algorithmic Analyses define and explain the MAAA codes at length. As the CPT® codebook explains, the MAAA code descriptors provide important details about the procedures they represent, such as:

When to Turn to Appendix O

Several MAAA tests are proprietary to a single clinical laboratory or manufacturer, and are commonly referred to by brand name (e.g., ROMA™, Harmony™, ScoliScore™) rather than by the details listed in the individual CPT® code descriptors. To aid in proper code assignment, CPT® Appendix O Multianalyte Assays with Algorithmic Analyses lists a number of MAAA tests by brand name and lab/manufacturer, matching them to the appropriate CPT® code. In this way, for example, you can quickly determine proper coding for AlloMap® is 81595 Cardiology (heart transplant), mRNA, gene expression profiling by real-time quantitative PCR of 20 genes (11 content and 9 housekeeping), utilizing subfraction of peripheral blood, algorithm reported as a rejection risk score.
A number of tests listed in Appendix O are reported using a four-digit number followed by the letter M, rather than a CPT® Category I code (e.g., 0004M Scoliosis, DNA analysis of 53 single nucleotide polymorphisms (SNPs), using saliva, prognostic algorithm reported as a risk score, which describes ScoliScore™, Tansgenomic, Inc.).
Whether assigning a Category I code or an M code, the test being billed “must fulfill the code descriptor and, if proprietary, must be the test represented by the proprietary name listed in Appendix O,” per CPT® instructions.
In other words: You must make an exact match to assign a specific code. “Close enough” doesn’t count. Instead, CPT® tells us, “When a specific MAAA procedure is not included in either [Appendix O] or in the Category I MAAA section, report the analysis using the Category I MAAA unlisted code (81599),” and “When an analysis is performed that may potentially fall within a specific descriptor, however the proprietary name is not included in [Appendix O], the MAAA unlisted code (81599) should be used” (see also CPT® Assistant, January 2015).
Appendix O is not an exhaustive list of brand-name MAAA procedures; in some cases, you must code solely from the CPT® code listings, based on the code descriptors.

Even if you are able to assign a code by referencing a brand name using Appendix O, be sure to check the full code listing in the Pathology and Laboratory section of CPT®. A majority of the 20+ MAAA Category I codes listings include parenthetical guidelines that are crucial for proper code application. For example, the complete listing for 81512 Fetal congenital abnormalities, biochemical assays of five analytes (AFP, uE3, total hCG, hyperglycosylated hCG, DIA) utilizing maternal serum, algorithm reported as a risk score tells us, “Do not report 81512 in conjunction with 82105, 82677, 84702, 86336.”

The MAAA codes “encompass all analytical services required … in addition to the algorithmic analysis itself.” For example, you would not separately report technical lab tests, such as 86140 C-reactive protein, in addition to an MAAA code because MAAA codes always include the underlying lab tests. MAAA codes also include cell lysis (using an agent or substance to break down cells into their components), but CPT® rules allow you to separately report procedures that are required prior to cell lysis, such as microdissection (88380 Microdissection (ie, sample preparation of microscopically identified target); laser capture and 88381 Microdissection (ie, sample preparation of microscopically identified target); manual).
Note, as well, that some payers may pay separately for collection of specimens (e.g., 36415 Collection of venous blood by venipuncture).

The following examples assume the payer follows CPT® guidelines:
Example 1: CPT® Changes 2016 offers the following example of 81525 Oncology (colon), mRNA, gene expression profiling by real-time RT-PCR of 12 genes (7 content and 5 housekeeping), utilizing formalin-fixed paraffin-embedded tissue, algorithm reported as a recurrence score:
A 60-year-old female with stage T3 mismatching repair (MMR) positive colonic adenocarcinoma visits her oncologists two weeks after surgery. The oncologist orders an assay to analyze the expression of 12 genes, including an algorithm which provides a recurrence score. The recurrence score predicts the risk of colon cancer recurrence for the patient and is used to help inform adjuvant treatment decisions.
Example 2: The patient is subject to Corus® CAD test. In Appendix O, this cross-references to CPT® 81493 Coronary artery disease, mRNA, gene expression profiling by real-time RT-PCR of 23 genes, utilizing whole peripheral blood, algorithm reported as a risk score. Be sure to check the code listing in the Pathology and Laboratory section; in this case, there are no further parenthetical directions to guide code application.
Example 3: The patient undergoes a test that meets the descriptor requirements for 81503 Oncology (ovarian), biochemical assays of five proteins (CA-125, apolipoprotein A1, beta-2 microglobulin, transferrin, and pre-albumin), utilizing serum, algorithm reported as a risk score, but the test is not OVA1™ by Vermillion, Inc. Per CPT® instruction, “When an analysis is performed that may potentially fall within a specific descriptor, however the proprietary name is not included in [Appendix O], the MAAA unlisted code (81599) should be used.” In this case, 81599 Unlisted multianalyte assay with algorithmic analysis is appropriate.

On a final note, Medicare doesn’t accept the MAAA codes, and (in defiance of CPT® rules) instead instructs you to bill the underlying test codes.
When reporting to Medicare, the situation is more complex and may require some research. For example, Medicare does not pay for MAAA 81538 Oncology (lung), mass spectrometric 8-protein signature, including amyloid A, utilizing serum, prognostic and predictive algorithm reported as good versus poor overall survival, and instead instructs you (via the 2016 Clinical Laboratory Fee Schedule final determinations) to report 83789 Mass spectrometry and tandem mass spectrometry (eg, MS, MS/MS, MALDI, MS-TOF, QTOF), non-drug analyte(s) not elsewhere specified, qualitative or quantitative, each specimen x 8 units.

John Verhovshek, MA, CPC, is managing editor at AAPC and a member of the Hendersonville-Asheville, N.C., local chapter.