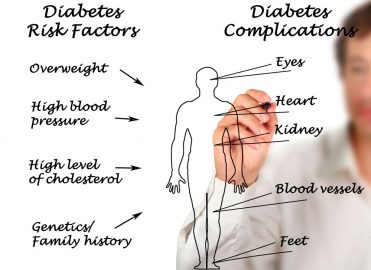 The American Hospital Association’s (AHA) Coding Clinic provides welcome relief for diabetes coders, describing new documentation requirements for establishing causal relationships in ICD-10-CM.
The change occurs in Coding Clinic, second quarter 2016:
Question: The AHA Central Office has received several questions requesting clarification of the advice published in the First Quarter 2016 issue regarding diabetes and associated conditions. The published advice is based on Guideline Section I.A.15 which says: The word “with” should be interpreted to mean “associated with” or “due to” when it appears in a code title, the Alphabetic Index, or an instructional note in the Tabular List. The classification presumes a causal relationship between the two conditions linked by these terms in the Alphabetic Index or Tabular.
Answer: The following example from the Alphabetic Index for the main term “Diabetes” and the subterm “with” demonstrates this linkage:
Diabetes, diabetic (mellitus) (sugar) E11.9
with

The subterm “with” in the Index should be interpreted as a link between diabetes and any of those conditions indented under the word “with.” The physician documentation does not need to provide a link between the diagnoses of diabetes and chronic kidney disease to accurately assign code E11.22, Type 2 diabetes mellitus with diabetic chronic kidney disease. This link can be assumed since the chronic kidney disease is listed under the subterm “with.” These conditions should be coded as related, even in the absence of provider documentation explicitly linking them, unless the documentation clearly states the conditions are unrelated and due to some other underlying cause besides diabetes. For conditions not specifically linked by these relational terms in the classification, provider documentation must link the conditions in order to code them as related.
Coding Clinic is accepted as an authority on ICD-10-CM rules for the Centers for Medicare & Medicaid Services (CMS) and private payers. This ruling tells you that entries linked in the Index under “Diabetes/with” have a causal relationship when the provider documents both conditions in the same note. Previously, many coders and auditors required stronger linkage language including “due to diabetes,” “diabetic,” or “as a complication of diabetes” to code a relationship between two conditions.

Although Coding Clinic has loosened most causal relationship requirements of diabetes coding, it has tightened others. For ICD-9-CM, Coding Clinic indicated that a causal relationship should be assumed between diabetes and osteomyelitis if both conditions were documented for the same date of service. This guidance changed for ICD-10-CM:
Question: A woman, who has had type 1 diabetes for 40 years, developed chronic osteomyelitis of the R heel and presents to the infectious disease clinic for follow-up. The provider also noted, ‘Chronic renal impairment (creatinine 290) due to diabetes.’ While at the clinic the patient became hypoglycemic and was treated. Does ICD-10-CM assume a relationship between diabetes and osteomyelitis when both conditions are present? How should this case be coded?
Answer: No, ICD-10-CM does not presume a linkage between diabetes and osteomyelitis. The provider will need to document a linkage or relationship between the two conditions before it can be coded as such. This information is consistent with that previously published in Coding Clinic (for ICD-10-CM), Q4 2013, page 114.
Assign code M86.671 Other chronic osteomyelitis, right ankle and foot as the first-listed diagnosis. Assign codes E10.649 Type 1 diabetes mellitus with hypoglycemia without coma, E10.29 Type 1 diabetes mellitus with other diabetic kidney complications, and N28.9 Disorder of kidney and ureter, unspecified as additional diagnoses.
Note that osteomyelitis is not a disorder that appears under “Diabetes/with” in the Index.

Clear Up Confusion on Other Coding Cases

Other coding scenarios addressed in Coding Clinic for ICD-10-CM regarding diabetes include:

Best practice is to review Coding Clinic each quarter. An easy and inexpensive way to keep up with Coding Clinic is to purchase it as an add-on to your software subscription.

Sheri Poe Bernard, CPC, COC, CPC-I, CCS-P, is a coding education and risk adjustment consultant and author of the AMA publication, Netter’s Atlas of Surgical Anatomy for CPT® Coding. Her 25-year career in coding and reimbursement includes developing coding curriculum and references for AAPC, the AMA, DecisionHealth, Elsevier, Optum360, and Staywell. Bernard is a member of the Salt Lake City, Utah, local chapter.

About Sheri Poe Bernard Has 8 Posts

No Responses to “Establish Causal Relationships in Diabetes Documentation”