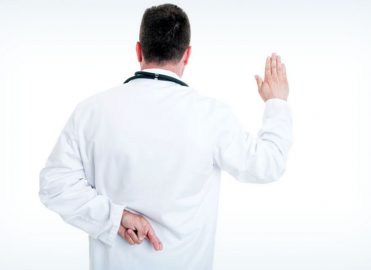 Recognize those that cross the line, and know how to respond.

By Brian Mahany, Esq., and Joe Rivet, CPC, CEMC, CPMA, CRHC, CHC, CCS-P, CICA, CHPC, CCEP
The False Claims Act (FCA), also known as the Lincoln Law, is a federal law that imposes liability on a person or company who defrauds the government (31 U.S.C. §§ 3729–3733). The FCA is the government’s primary weapon in combating fraud and abuse in healthcare. The law allows the government to recover treble (triple) damages and penalties of up to $21,563 per claim (Section 3729(a)(1) of the FCA). Each bill sent to Medicare or Medicaid for payment is a separate claim.
Penalties can add up quickly. For example, 100 claims under the FCA equals $2,156,300 in penalties alone — not including treble damages.
Under the FCA, a relator (whistleblower) can receive between 15-30 percent of the proceeds of the action or settlement of the claim, depending on the extent to which the person substantially contributed to the prosecution of the action.

Providers trust their contracted billing companies to submit accurate and timely claims to payers, including engaging in proper appeals processes. Some billing companies have breached that trust over the years, however, resulting in false claims allegations and settlements.

For example, a radiology billing company, Medical Business Services, Inc. (MBS), breached that trust in a billing scheme brought to light by Katlisa N. Vaughn, a whistleblower, who received a portion of the $1.95 million settlement. MBS was charged with violating the FCA by fraudulently changing diagnosis codes on claims submitted to Medicare and Medicaid to get rejected claims paid on behalf of the radiologists. The Office of Inspector General (OIG) stated that the billing company “[had] no less of a duty to ensure truthful information on claims than do the providers who use these services.”
Billing companies have broad exposure and many of them bill for physician groups and hospitals in several states. Most in the healthcare industry are familiar with the FCA, but few realize that most states and some cities also have a false claims statute. Depending on the jurisdiction, a false claim could be brought under both federal and state laws.

An Oklahoma-based emergency physician billing company, Emergency Physicians Billing Service (EPBS), agreed to pay $15 million to resolve allegations of false billing to Medicare, Medicaid, TRICARE® programs, and the Federal Employees Health Benefits Program (FEHBP). EPBS handled billing for more than 100 emergency physician groups in at least 33 states. The billing company and its owner were held liable under the FCA based on evidence that EPBS up-coded claims and billed for services more extensive than those actually provided. Theresa Semtner originally filed the whistleblower claim, but died before the case concluded; her estate received approximately $3.2 million.

Janzen, Johnston & Rockwell Emergency Medical Management Services, Inc. (JJ&R) agreed to pay $4.6 million to settle false claims allegations to Medicare and Louisiana’s Medicaid program. The false claim was brought by Le Jeanne Harris, a former employee of JJ&R. For her efforts in bringing the claim, she received a whistleblower award of $774,450. The allegations in this case not only included up-coding evaluation and management (E/M) services, but also that JJ&R routinely added charges to E/M services for minor procedures, such as pulse oximetry, provided by nursing or other staff. The billing company allegedly failed to comply with Medicare’s coding rules governing the submission of claims for teaching physicians, resulting in improper claims payments.

Complying with a client’s requests does not insulate or grant immunity to a billing company from potential false claims liability. For example, a physician and billing company both settled Medicare false claims charges regarding an incident-to billing issue. Perry Hearn, MD, of Norwell, Massachusetts and Affiliated Professional Services, Inc. (APS), based in Wareham, Massachusetts were successfully prosecuted under the FCA. According to reports, Hearn instructed his billing company, APS, to bill all services submitted to APS under his provider number, wrongly implying that he performed the services himself, or had directly supervised those services. The physician had to pay $150,000 and the billing company had to pay $100,000 to resolve the charges. The whistleblower who brought in the claim received $50,000.

When Billing Companies and Coders Cross the Line

Although most billing companies make every effort to bill clean claims, there is a risk of overzealousness. Coding has become very competitive and sometimes coders will cross the line to get or keep a client. Often, billing companies are subject to strict policies set forth by their client on what (or how) to bill services. As the APS case points out, a billing company simply acting on its client’s instructions does not protect it from liability under the FCA.
The above cases all deal with outside coding and billing companies. “Inside” coders and billing professionals—those who work directly for a provider—can also be held liable. Although the government rarely criminally prosecutes coders for acting on their boss’ instructions, there are cases where prosecutors have targeted them.

Know What to Look For

If you are unsure of how a code is to be used, what is considered proper documentation, or how a service or procedure should be billed, ask someone who knows. There is nothing wrong with the “trust but verify” approach.
Sign up to receive feeds from reputable Listservs, read whistleblower cases, review communications from health plans, and read the Centers for Medicare & Medicaid Services’ (CMS) final rules. Staying informed will help you consistently achieve compliant coding and reporting.
Also look at trend data compared to other providers who bill for the same services. Providers who are billing for services or procedures when no other provider of the same specialty is, will stand out as obvious outliers among their peers.
Another controversial practice to watch out for is “balance billing,” or billing the patient the difference between the provider’s charge and the allowed amount. This can be considered an act of fraud. An example of balance billing is when the provider’s charge is $200, the allowed amount under the insurance is $125, and the provider bills the patient the remaining $75.
Balance billing is becoming more prevalent as medical costs increase and reimbursements to providers and hospitals decrease. It’s most common when a patient is treated by an in-network facility when an out-of-network provider participates in the patient’s care without the patient’s knowledge or consent, such as in emergency departments operating out-of-network.
Medicare has taken note of the uptick in balance billing, and is keeping a watchful eye on those who violate balance billing regulations (especially those who refuse to refund money to patients).

Steps to Take if You See Potential Fraud

Promoting a culture of compliance is a constant work effort that can prove invaluable to a company of any size. The OIG publishes the Compliance Program Guidance for Third-Party Medical Billing Companies. Although this guidance is nearly 20 years old, the fundamentals of an effective compliance program are still used today. Companies can use this guidance as a foundation for putting in place adequate systems for promoting and facilitating legal conduct.
An effective compliance program includes an audit plan and policies for investigating misconduct. OIG guidance recommends billing companies be transparent with their clients and inform them of their audit plans and policies for investigating misconduct.
Among the basic elements of compliance, there should be an internal way for employees to raise concerns without fear of retaliation. The majority of whistleblower cases are brought by current or former employees who made a good faith effort to raise a concern that was ignored or not addressed. All such issues discussed between coding or billing staff and the organization should be maintained in a log.
Coders who see significant violations can also report the conduct directly to CMS or file an FCA case. The CMS Medicare Fraud Hotline allows anonymous complaints; such whistleblower awards are generally limited to $1,000. Coders and billers who report suspected fraud are protected against retaliation by federal law. Employers who retaliate can be held responsible for legal fees and double damages.

The FCA is a civil remedy that allows the government to collect triple damages and hefty penalties. Recently, the Department of Justice (DOJ) has been ramping up criminal prosecutions of those engaged in healthcare fraud. On Sept. 9, 2015, the DOJ released new guidelines requiring that prosecutors specifically look for the individuals responsible for corporate wrongdoing. This policy is called the Yates memo. The DOJ has outlined six key steps in pursuing individuals for their corporate misdeeds.
The Yates memo instructs federal prosecutors not to offer any cooperation credit to corporations under investigations unless the corporation provides facts about individuals involved in the corporate misconduct. Further, the memo mandates that both criminal and civil investigations should focus on individuals from their inception. The DOJ’s renewed emphasis is not just on individuals, but “high-level executives,” as well. The DOJ has announced that its prosecutors will automatically review all new civil whistleblower complaints to determine whether a complaint outlines any criminal misconduct.
Increased enforcement put forth by the Yates memo are now coming to life. Recently, former CEO Ralph Cox III at Tuomey Healthcare had to pay $1 million to resolve his involvement in a Stark law issue surrounding physician compensation arrangements. He is excluded from participating in any federal program for four years.
Chairman of the Board John Soreson at North American Health Care Inc., (NACH) had to pay $1 million over allegations that NACH violated the FCA by submitting medically unnecessary rehabilitation services to the government. NACH Senior Vice President of Reimbursement Analysis Margaret Gelvezon had to pay $500,000 in reparation.

Lesson to Be Learned

Brian Mahany, Esq., is a leading American whistleblower and fraud recovery lawyer. Author of Saints, Sinners & Heroes – Covert Ops in the Wars Against the C-Suite Mafia, Brian holds the record for the largest whistleblower case in U.S. history and has helped whistleblowers collect more than $100 million in rewards over the past three years.
www.mahanylaw.com
Joe Rivet, CPC, CEMC, CPMA, CRHC, CHC, CCS-P, CICA, CHPC, CCEP, is a third year law student and law clerk with MahanyLaw focusing exclusively on the FCA. He brings coding, billing, and documentation expertise to the firm, which has a unique and highly successful approach to false claims actions. Rivet is a member of the Ann Arbor, Mich., local chapter. You can contact him at jrivet@mahanylaw.com.

Brian Mahany
Brian Mahany, Esq., is a leading American whistleblower and fraud recovery lawyer. Author of Saints, Sinners & Heroes – Covert Ops in the Wars Against the C-Suite Mafia, Brian holds the record for the largest whistleblower case in U.S. history and has helped whistleblowers collect more than $100 million in rewards over the past three years.

About Brian Mahany Has 1 Posts

Brian Mahany, Esq., is a leading American whistleblower and fraud recovery lawyer. Author of Saints, Sinners & Heroes – Covert Ops in the Wars Against the C-Suite Mafia, Brian holds the record for the largest whistleblower case in U.S. history and has helped whistleblowers collect more than $100 million in rewards over the past three years.