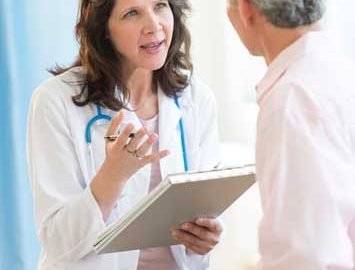 Editor’s Note: After this article was written, a Medicare administrative contractor announced new definitions for “detailed” and “expanded poblem-focused.” See the May issue of Healthcare Business Monthly to learn more.

Within the Centers for Medicare & Medicaid Services’ (CMS) 1995 Documentation Guidelines for Evaluation and Management Services, the definition of a detailed exam has been causing dissention among the troops for years.
The source of contention is that, although the 1995 guidelines define a detailed exam as an “extended exam of the affected area(s) and other symptomatic or related organ system(s),” neither CPT® nor CMS defines the term “extended.” This oversight leaves much open to interpretation by Medicare administrative contractors (MACs).
After a quick review of the offending section in the 1995 exam guidelines, we’ll review how MACs have responded to the situation.

For purposes of examination, the following organ systems are recognized:

The extent of examinations performed and documented is dependent upon clinical judgment and the nature of the presenting problem(s). They range from limited examinations of single body areas to general multi-system or complete single organ system examinations.
Documentation Guidelines
Specific abnormal and relevant negative findings of the examination of the affected or symptomatic body area(s) or organ system(s) should be documented. A notation of “abnormal” without elaboration is insufficient.
Abnormal or unexpected findings of the examination of the unaffected or asymptomatic body area(s) or organ system(s) should be described.
A brief statement or notation indicating “negative” or “normal” is sufficient to document normal findings related to unaffected area(s) or asymptomatic organ system(s).
The medical record for a general multi-system examination should include findings about 8 or more of the 12 organ systems.
The number of body areas or systems for the problem-focused exam is one, and the general multi-system exam must include at least eight systems. As such, both the expanded problem-focused and detailed exams may be composed of two to seven body areas and/or systems. Nothing specifies that the examination of body areas and organ systems can’t be combined, that a detailed exam must include more than two systems, or that more than a statement of “normal” is sufficient for an exam of an area without abnormal findings.

Five MACs — Cahaba, CGS, First Coast Service Options, Noridian, and WPS) — follow the CMS definition as it stands.
National Government Services (NGS) states, as shown in Figure A, that six systems must be examined and, for documentation purposes, requires “more than checklists.” Normal/abnormal findings must be expanded upon; although, “expanded upon” isn’t defined. This represents a change from their instruction in 2015, shown in Figure B, which requires only two systems. This is also a reversal to their position in 2011, when NGS stated that “6-7 body areas or organ systems must be documented.” 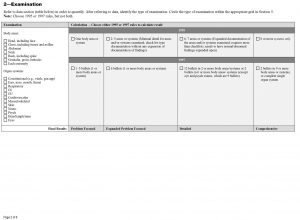 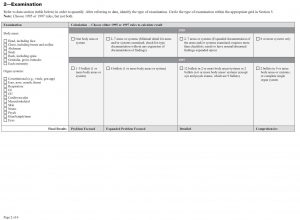 Novitas offers an interactive online tool that requires either an undefined extended exam of at least four body areas or scoring by the “4 by 4” method (four 1997 bullets from each of four organ systems). Unlike CMS guidelines, Novitas does not allow mixing of areas and systems; although, Novitas’ paper scoring tool, shown in Figure C, defaults to the CMS standard with minimal modification. 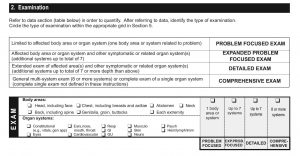 Defining and Quantifying an Extended Exam

Extended is a qualitative term, not a quantitative one. A challenge for MACs is to interpret the qualitative term extended by equating it to a reasonable quantitative definition. The use of the 4 by 4 method by Novitas demonstrates that a first step toward this might be to use the 1997 E/M documentation guidelines to help quantify.
Table 1 shows the number of 1997 exam elements identified for each specialty.
Table 1: 1997 Exam Elements Per Specialty

Using the 1997 bullets as a basis for numeration, what quantitative terms are suitable replacements?
All bullets is not acceptable because that probably equates to a comprehensive level in the 1995 system (a complete exam of a single system). Likewise, one or two bullets probably best cover the 1995 limited exam. That leaves two most likely candidates: multiple and majority.
Using the majority approach yields the results shown in Table 2 for each specialty exam. Using the multiple approach results in a three-bullet minimum for each specialty exam.
Table 2: Majority Approach

CMS and MACs Aren’t on the Same Page

MACs have adopted differing standards for various issues involving claims payment and auditing, which is not inherently problematic because it’s what CMS has given them the authority to do when the CMS regulation is not fully expressed or interpreted. It’s not clear if they have the authority to override CMS regulation. If a claim appeal relating to a conflict between CMS regulation and a MAC’s override of the regulation rises to the level of a Medicare final court of appeal administrative law judge (ALJ) hearing, the ALJ will favor the CMS regulation.
Many MACs have changed and/or reversed their positions on this issue more than once, creating confusion and frustration among providers and those instructing them on how to code and bill for their services. It’s little wonder that the Office of Inspector General calculated the national E/M coding error rate to be over 40 percent in a 2014 published study of 2010 E/M billed services.
Eliminating the 1995 guidelines in favor of the 1997 guidelines would address this issue, as would the adoption of another, better set of guidelines. Until then, CMS’ assignment of a quantitative definition of an “extended” exam would decisively and universally eliminate the difficulties the lack of it has caused.

In 1995, the Centers for Medicare & Medicaid Services (CMS) published its first set of Documentation Guidelines for Evaluation and Management (E/M) Services. These guidelines expanded the CPT® E/M guidelines and attempted to make the code assignment criteria more objective and quantifiable.
Just two years later, at the behest of specialist providers, CMS issued 1997 guidelines, which counted the specific exam elements, or bullets, in each organ system to determine the level of exam performed — instead of counting the number of either “limited” or “expanded” examinations of organ systems.
Another revision in 2000 was driven by clinical vignettes instead of data, but proved too difficult to apply effectively and was abandoned.

Brian Meredith, CPC, is president and founder of Healthforce, Inc., a healthcare administrative consulting firm with a focus on revenue integrity through compliance, coding, and billing guidance. He has over 20 years’ experience in the healthcare industry, including director of billing compliance at Boston Children’s Hospital, compliance and coding consultant with Public Consulting Group, and compliance specialist with UMass Memorial Medical Group. Meredith is a member of the Holyoke, Mass., local chapter.