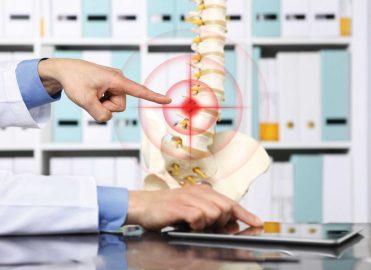 Understand the procedures and approaches for better coding of operative reports.

There are different surgical approaches for spinal fusion. When coding arthrodesis, you must be sure to match the approach on the surgical report to the CPT® code description. Let’s review arthrodesis treatments for spinal conditions and then look at a case study showing why approach matters when coding.

Spinal arthrodesis is the surgical fusion of the spinal vertebrae, which immobilizes the spine to relieve pain at the vertebral segment. Spinal fusion is used for treatment of scoliosis, deformity, degenerative disc disease, fractures, and other conditions of the spine.
Immobilization is accomplished by use of bone graft. Bone graft can be obtained from the patient’s own body (autograft), from a cadaver (allograft), or manufactured (synthetic bone-like material). The use of a graft promotes the formation of a new bone by the cells contained within the graft. Instrumentation (such as screws, rods, metal plates, etc.) also may be used to hold the vertebrae together.

Because the surgeon took an anterior approach to reach the damaged vertebrae, with an incision made through the neck for cervical vertebrae, report 22554 Arthrodesis, anterior interbody technique, including minimal discectomy to prepare interspace (other than for decompression); cervical below C2.
Report 63081 Vertebral corpectomy (vertebral body resection), partial or complete, anterior approach with decompression of spinal cord and/or nerve root(s); cervical, single segment for resection of a single vertebral body. Per the operative report, the disk space was incised and the disk material was removed in a piecemeal fashion with the pituitary rongeur and a curette.
Report +20931 Allograft, structural, for spine surgery only (List separately in addition to code for primary procedure) because the physician prepared and inserted an allograft.
Report +22845 Anterior instrumentation; 2 to 3 vertebral segments (List separately in addition to code for primary procedure) for the anterior instrumentation of two to three vertebral segments.

A patient with a C4-C5 large central herniated nucleus pulposus presents for arthrodesis.
After obtaining informed consent from the patient, which included full understanding of the risks, benefits, and alternatives to surgery, the patient was taken to the operating room and underwent successful induction of general endotracheal anesthesia. Prophylactic IV antibiotic was given. Bilateral compression hoses were placed. The patient was placed supine on the operating table in the halter traction with five pounds of weight and a roll under the neck and the shoulders.
Anterior neck was then prepped and draped in the standard surgical fashion. A right para midline incision was made at the upper skin crease, and the dissection was carried down through the platysma. Blunt dissection technique was used to dissect between the carotid sheath and the midline structures to the prevertebral fascia. Preoperative X-ray was then obtained to confirm the level of surgery. The longus colli muscle along both sides of the vertebral bodies was freed up using the Bovie cautery, and the Cloward retractor was placed under the muscle. Having identified the C4-C5 level using the cross table X-ray, the disk space was incised and the disk material was removed in a piecemeal fashion with the pituitary rongeur and a curette. Two Caspar pins were placed, and the Caspar pin distractor was used to distract the interspace. The residual disk materials were then removed with a curette and pituitary rongeur. There was a posterior longitudinal ligament (PLL) that was torn, and several large herniated disk pieces were posterior to the PLL.
A partial C5 corpectomy (30-40 percent) was performed, as the disk fragments had migrated inferiorly behind the C5 body, to safely retrieve the fragments and to ensure that all the disk fragments were removed.
The uncovertebral joint was then decompressed bilaterally with a curette and Kerrison punch until there was no compression of the nerve roots on both sides. With the interspace distracted, a 9 mm bone graft was tapped into the C4-C5 interspace under direct vision, without difficulty.
After removing the Caspar pins, the wound was then thoroughly irrigated with bacitracin irrigation.
A 16 mm Synthes Vectra cervical plate was placed between C4 and C5 vertebral bodies for interbody arthrodesis. A crosstable lateral radiograph was obtained to ensure there was good placement of the screws. The Cloward retractors were then removed. The trachea and esophagus appeared to be in good condition. The neurovascular bundle immediately lateral was also in good condition. The wound was irrigated with bacitracin.
The wound was closed in layers using 2-0 Vicryl sutures, and the platysma was closed using inverted interrupted 3-0 Vicryl sutures at the dermal layer. Mastisol and Steri-Strips were then applied, followed by sterile 4 x 4 and coverall dressing. A soft cervical collar was placed around the neck.

Oby Egbunike, CPC, COC, CPC-I, CCS-P, is a licensed instructor for AAPC. She has a Bachelor of Arts in Business Administration with concentration in Health Information Management from Northeastern University Boston. Egbunike has more than 10 years of experience in healthcare management, coding, billing, and revenue cycle. She is the director of professional coding and education at Lahey Health. Egbunike is a member of the Burlington, Mass., local chapter.

No Responses to “Approach Matters for Spinal Arthrodesis”