HEALTHCON: A Challenge to Lead 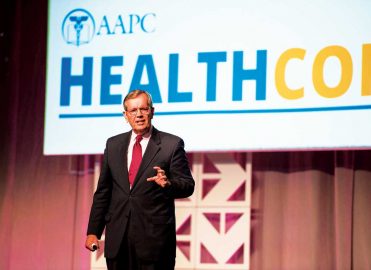 Leavitt says coders must take the lead on healthcare reform.

HEALTHCON keynote speaker Mike Leavitt, former Utah governor and U.S. Department of Health and Human Services secretary, challenged AAPC members to be the leaders in health reform. Leavitt detailed the history and future of the movement in his speech to a full house, telling attendees the country is in the 25th year of a 40-year process. He assured HEALTHCON attendees that recent political posturing in the executive and legislative branches would not derail the outcome, which he predicts will be a more efficient and effective form of healthcare.
The nationally-known healthcare reform expert said the United States needs to heed the lessons of countries like Argentina, which bankrupted itself with social programs. A worldwide movement of “dispassion” has become prevalent as governments and economies realize not all can be done for all citizens. This dispassion drives many of the political proposals for the healthcare system, as the United States seeks to remain economically powerful. But he cautioned against losing compassion, which he believes is an inherent American value.
This means two forces pull on the development of health reform, which dates back to before Richard Nixon, and continues to progress like a glacier. Early adopters of recent initiatives are excited about the change, which introduces efficiency into the system, he said, but many are digging in their heels.

Leavitt explained that in the old model providers are the general contractors of the healthcare process, much as in building a house. Everyone else is a subcontractor to the provider. That’s changing. All participants, including providers, will be subcontractors to the organization coordinating care for the patient.
The Utah native showed an image with audio of cattle being moved to summer pasture. He explained the mooing was from cows and their calves trying to find each other, or “mothering up.” If cows don’t get to mother up, he explained, they stampede back to the place where they were last together. Good cowhands periodically stop the herd so everyone can find their kin. Providers and other slow adopters of healthcare reform need time to mother up, he said.
The mechanics of Obamacare and the Merit-based Incentive Payment System (MIPS) — a provision of the Medicare Access and CHIP Reauthorization Act of 2015 (MACRA) — along with the penetration of accountable care organizations (ACO) offer a glimpse of the future. Leavitt maintains the elements for success of the new health system are:

Where We Fit In

Never fear, coders’ roles will be central to the drive for quality and efficiency in the new healthcare system. Leavitt sees coders coordinating the data collected and disseminating it to care managers, payers, and regulators. It will be up to us, Leavitt said, to educate providers on changing documentation requirements; to interpret payers’ policy guidelines; to help build useful and standardized electronic health record templates; to gather and report the right information to payers; and to monitor the reporting of this information to the care coordinators who may be private payers, governmental entities, or some entity yet to evolve.
Don’t let the political rancor rattle you. The politics are all for show, and they won’t stop the move toward quality and efficiency in our new healthcare environment. Both political parties are anxious for quality and efficiency to be the hallmark of the new system — a system that relies on good coding to work.