Know the Difference Between Medicare and Medicaid NCCI Edits 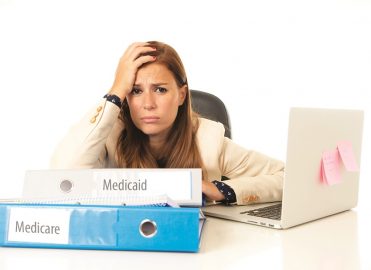 Follow the correct edit to promote payment and avoid denial.

By Samantha Prince, BSHCM, COC, CPC, CPMA
National Correct Coding Initiative (NCCI) edits for Medicare and Medicaid are not the same. If you’re following Medicare edits for Medicaid claims, you may have claims denying inappropriately. That’s missed revenue you could capture by applying the correct NCCI edits.

The NCCI promotes national correct coding methodologies and reduces improper coding and inappropriate payments for Medicare Part B and Medicaid claims. There are two types of NCCI edits for Medicare and Medicaid programs:
Procedure-to-procedure (PTP) edits define pairs of HCPCS Level II and CPT® codes that should not be reported together for a variety of reasons.
Medically unlikely edits (MUEs) define for each HCPCS Level II and CPT® code the maximum units of service (UOS) a provider would report under most circumstances for a patient on a single date of service.
Changes to the edits are released quarterly on the first of the month in January, April, July, and October. The purpose of the PTP edit is to prevent improper payments when incorrect code combinations are reported. The purpose of the MUE edit is to prevent improper payments when services are reported with incorrect units of service.
Both the Medicare and Medicaid NCCI programs are managed by the Centers for Medicare & Medicaid Services (CMS); however, the NCCI programs have significant differences between Medicare and Medicaid.
The Affordable Care Act of 2010 required state Medicaid programs to incorporate NCCI methodologies into their Medicaid Management Information System (MMIS) claims processing systems, effective Oct. 1, 2010. Medicaid programs adopted the NCCI Policy Manual for Medicare Services with minor modifications. Five NCCI methodologies for state Medicaid programs were identified initially for implementation:
(1) PTP edits for practitioner and ambulatory surgical center (ASC) claims.
(2) PTP edits for outpatient hospital services including emergency department (ED), observation care, and outpatient hospital laboratory services.
(3) MUE UOS edits for practitioner and ASC services.
(4) MUE UOS edits for outpatient hospital services including ED, observation care, and outpatient hospital laboratory services.
(5) MUE UOS edits for durable medical equipment (DME) billed by providers.
Medicaid implemented an additional NCCI methodology in October 2012:
(6) PTP edits for DME.
Page 4 of the Medicaid NCCI Policy Manual (revised January 2017) explains:
Most edits in the original five Medicaid NCCI methodologies are adopted from the Medicare NCCI. However, not all Medicare NCCI edits in these methodologies have been adopted by the Medicaid NCCI program. Some Medicare NCCI edits are not present at all in Medicaid NCCI and others are present but differ in some way from the corresponding Medicare NCCI edits. Medicaid NCCI PTP edits for durable medical equipment are unique to the Medicaid program – i.e., Medicare NCCI does not have DME NCCI PTP edits. The Medicaid NCCI program has also developed additional edits in the original five methodologies that are unique to Medicaid NCCI – e.g., edits for codes that are noncovered or otherwise not separately payable by the Medicare program.

Get the Details of Medicaid’s NCCI Program

The Medicaid NCCI program’s six methodologies (three for PTP and three for MUEs) apply only to Medicaid fee-for-service claims reimbursed based on the HCPCS Level II/CPT® code billed.
In addition to the edits, each file also contains an edit rationale. PTP edits may be bypassed based on modifier use. NCCI-approved modifiers can be found in chapter 1, section E of the Medicaid NCCI Policy Manual on page I-21:
Anatomic modifiers: E1-E4, FA, F1-F9, TA, T1-T9, LT, RT, LC, LD, RC, LM, RI
Global surgery modifiers: 24, 25, 57, 58, 78, 79
Other modifiers: 27, 59, 91, XE, XP, XS, XU
These modifiers are referred to as NCCI PTP-associated modifiers. Per the NCCI Policy Manual:
Each NCCI PTP edit has an assigned modifier indicator. A modifier indicator of ‘0” indicates that an NCCI PTP edit will not be bypassed even if an NCCI PTP-associated modifier is appended to one of the codes. A modifier indicator of “1” generally indicates that an NCCI PTP-associated modifier will result in the edit being bypassed. However, if both codes in the edit pair have the same anatomic modifier and neither code has modifier 58, 59, 78, 79, XE, XP, XS, or XU, the PTP edit is not bypassed. A modifier indicator of “9” indicates that the edit has been deleted, and the modifier indicator is not relevant. The Correct Coding Modifier Indicator can be found in the files containing MCD NCCI PTP edits on the CMS web site.
It is very important that NCCI PTP-associated modifiers only be used when appropriate. In general, these circumstances relate to separate patient encounters, separate anatomic sites or separate specimens. (See subsequent discussion of modifiers in this section.)
Let’s look at examples of PTP edits and MUEs edits.

99394 Periodic comprehensive preventive medicine reevaluation and management of an individual, including an age and gender appropriate history, examination, counseling/anticipatory guidance/risk factor reduction interventions, and the ordering of laboratory/diagnostic procedures, established patient; adolescent (age 12 through 17 years)
99214 Office or other outpatient visit for the evaluation and management of an established patient, which requires at least 2 of these 3 key components: A detailed history; A detailed examination; Medical decision making of moderate complexity. Counseling and/or coordination of care with other physicians, other qualified health care professionals, or agencies are provided consistent with the nature of the problem(s) and the patient’s and/or family’s needs. Usually, the presenting problem(s) are of moderate to high severity. Typically, 25 minutes are spent face-to-face with the patient and/or family
PTP edits for practitioner and ASC services:

The reason this PTP can be bypassed is, per the CPT® codebook, modifier 25 Significant, separately identifiable evaluation and management service by the same physician or other qualified health care professional on the same day of the procedure or other service may be applied to evaluation and management (E/M) services when another, separately identifiable service is performed on the same date of service.
Here’s another PTP edit for outpatient services in hospitals (including ED, observation, and hospital laboratory services):

The reason this PTP can be bypassed is that, per the CPT® codebook, modifier 25 may be applied to E/M services when another separately identifiable service is performed on the same date of service.
There is no PTP edit for provider claims for DME because 99394 and 99214 are not DME codes; this methodology/edit does not apply.

44960 Appendectomy; for ruptured appendix with abscess or generalized peritonitis

The practitioner services MUE value for 44960 is based on human anatomy because there is only one appendix, so it can only be removed once. By setting the MUE to one, no more than one unit can be billed and paid.

The MUE value for 44960 for outpatient hospital services is one because this procedure is assigned a status indicator (SI) of C, representing an inpatient-only procedure per CMS Addendum B. Inpatient-only services cannot be done in an outpatient setting.
There is no MUE edit for provider claims for DME because 44960 is not a DME code; this methodology/edit does not apply.

Edits May Be Retroactive

Retroactive deletions for MUE and PTP edits occur for all six methodologies/edits. For example, the PTP edit for codes 77295 3-dimensional radiotherapy plan, including dose-volume histograms and 77300 Basic radiation dosimetry calculation, central axis depth dose calculation, TDF, NSD, gap calculation, off axis factor, tissue inhomogeneity factors, calculation of non-ionizing radiation surface and depth dose, as required during course of treatment, only when prescribed by the treating physician was deleted, retroactive to Jan. 1, 2016. Deletions occur for various reasons, including when code descriptions are revised or codes are deleted, making the edits no longer applicable. Edits also may be deleted at the request of providers with supporting documentation proving that the edit is not applicable to medical practice. Due to how NCCI edits are released (quarterly), retroactive deletions of PTP edits and other changes that occur mid-quarter do not show until the next quarter is released.
Following the correct edit, Medicare or Medicaid, for the claim can mean all the difference between payment and denial. Don’t miss hard-earned revenue by following the wrong edit.

Samantha Prince, BSHCM, COC, CPC, CPMA, is a reimbursement analyst with the Department of Vermont Health Access and an adjunct instructor at the Northwest Technical Center in St. Albans, Vt. Prince is a 2015 graduate of Champlain College. She has been certified since 2010 and has served as the secretary, treasurer, and president of her local Burlington, Vt. chapter.