Bring Awareness to Crohn’s and Colitis in December 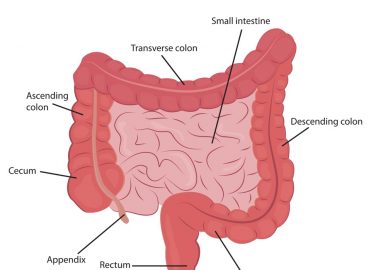 I first heard the term Crohn’s disease when I was 12 years old. The surgeon who had just finished operating on my older sister was talking to my grandparents. She didn’t have acute appendicitis, after all, he said. A section of her small intestine had calcified from chronic inflammation.
That was the first of many hospitalizations and surgeries my sister endured to regain her health. Probably the hardest part for her was finding out she had an incurable disease she would have to cope with the rest of her life, and she was only 16.

According to a case report published in Inflammatory Bowel Diseases, “Small bowel calcification is a rare finding, often associated with chronic infection or small intestinal neoplasms.” My sister’s diagnosis came as a surprise because her symptoms had become chronic complaints: abdominal pain, fatigue, and reduced appetite. These are common symptoms for a host of ailments, many of which are benign. She hadn’t experienced diarrhea, rectal bleeding, or unexplained weight loss, which would’ve sent up red flags. It was a high fever that eventually put her in the hospital.
Linking symptoms to Crohn’s early on allows the physician to treat the patient for the disease before it causes irreparable damage that necessitates surgery, such as the small bowel resection my sister underwent. Adolescent girls often shy away from discussing bodily functions, so physicians should look for outward signs. For example, a fiery intestine isn’t likely to absorb nutrients properly, which can lead to malnutrition and its causal effects (stunted growth, slack skin, depression, etc.).

The etiology of Crohn’s isn’t certain, but family history is a likely factor. Other hypotheses include the environment (bacteria, etc.), an overactive immune system, and stress. A person’s diet alone is not believed to cause Crohn’s — although, it’s certainly affected by it.
Absent a definitive test for diagnosing Crohn’s, blood tests, imaging, and colonoscopies are generally ordered.
Crohn’s can affect the entire gastrointestinal tract and may extend through the entire thickness of the bowel wall. To take advantage of the specificity ICD-10-CM provides, the physician should document:
Location of the affected area:

This information allows you to choose the appropriate code from Chapter 11: Diseases of the Digestive System, under the category K50 Crohn’s disease [regional enteritis]. ICD-10-CM instructs us to “Use additional code to identify manifestations such as: pyoderma gangrenosum (L88)” — the technical name for ulcer.

Upon diagnosis of Crohn’s, antibiotics are usually the first course of treatment. Steroids or other medications are sometimes used to calm down an overactive immune system. After the inflammation subsides, adhering to a “low residue” diet — made up of foods easy to digest and low in fiber — can ward off unwanted side effects such as diarrhea. Screening colonoscopies are also advisable, as Crohn’s disease increases the risk for colon cancer.

Ulcerative colitis is another form of inflammatory bowel disease, but it bears distinct differences to Crohn’s. It is also a chronic disease, but inflammation only occurs in the innermost lining, or mucosal surface, of the large intestine. Symptoms can be similar to Crohn’s, but may include tenesmus (a sudden, constant feeling that you need to have a bowel movement — not to be confused with spastic colon or irritable bowel syndrome, which are not classified as chronic diseases).
To properly code ulcerative colitis, the physician must document the location and severity of the inflammation:
Location of the affected area:

ICD-10-CM instructs us to “Use additional code to identify manifestations such as: pyoderma gangrenosum (L88)” with codes from category K51 Ulcerative colitis.

The Prognosis Is Good

Some 40 years (and five children) later, my sister leads a full life with Crohn’s. She isn’t in perfect health, but she’s learned to manage her disease and a house full of boys.