Sequence Anemia in Order of Events 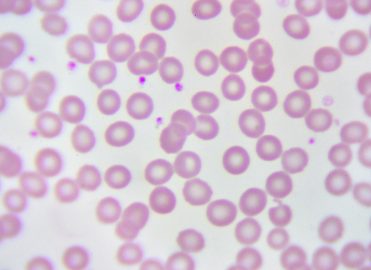 Is the anemia due to a malignancy or an adverse effect to treatment of the malignancy?

Proper ICD-10-CM coding of anemia requires the coder to know what is causing the condition. Let’s look at types of anemia, and medical coding and sequencing of the disease when it is caused by a malignancy or adverse effect.

Anemia is a disease of the blood that occurs when a patient’s red blood cells are reduced and there is a lack of oxygen delivery to cells and tissues. Symptoms include weakness and fatigue.
The components of blood are red blood cells (erythrocytes), white blood cells (leukocytes), and platelets. Hemoglobin, an important component of the red blood cells, is comprised of a protein called globulin and a heme molecule, which binds to iron.
There are many types of anemia but the most common are:

Anemia may be a causal effect of another disease, such as a malignancy, or an adverse effect of treatment such as radiotherapy, chemotherapy, or immunotherapy.
There are specific ICD-10-CM coding guidelines for proper code selection and sequencing of anemia caused by other diseases.

According to the 2018 ICD-10-CM Official Guidelines for Coding and Reporting, when the reason for the encounter is to manage anemia associated with a malignancy, and the treatment is only for anemia, the appropriate code for the malignancy is sequenced first, followed by the appropriate code for anemia.
Example: A 47-year-old female patient with a diagnosis of lung cancer presents to her oncologist, reporting excessive fatigue and decreased tolerance to exercise. A lab test performed by the oncologist determines the patient has anemia due to the lung cancer.
ICD-10-CM coding:
C34.90    Malignant neoplasm of unspecified part of unspecified bronchus or lung
D63.0      Anemia in neoplastic disease
Remember: When the reason for the encounter is to manage anemia caused by a malignancy, sequence the malignancy code first, followed by the anemia code.

Anemia Due to Chemotherapy, Immunotherapy, or Radiation Therapy

According to the 2018 ICD-10-CM Official Guidelines for Coding and Reporting, when the reason for the encounter is for management of anemia associated with the adverse effect of chemotherapy, immunotherapy, or radiation therapy, the anemia code is sequenced first, followed by the appropriate code for the neoplasm and the adverse effect code (T45.1X5 Adverse effect of antineoplastic and immune suppressive drugs)
The same guideline applies to management of radiotherapy (Y84.2 Radiological procedure and radiotherapy as the cause of abnormal reaction of the patient, or of later complication, without mention of misadventure at the time of the procedure)
Example: A 68-year-old male with prostate cancer receiving chemotherapy visits his oncologist to receive a Procrit® injection for anemia caused by the chemotherapy.
ICD-10-CM coding:
D64.81   Anemia due to antineoplastic chemotherapy
C61          Malignant neoplasm of prostate
T45.1X5A            Adverse effect of antineoplastic and immunosuppressive drugs, initial encounter
Remember: When the reason for the encounter is to manage anemia for an adverse effect, sequence the anemia code first, the malignancy code second, and adverse effect code third.
To learn about complete blood count testing for red blood cells, read the article “Examine Testing for Complete Blood Counts without Platelets” in AAPC’s Knowledge Center.

Oby Egbunike, CPC, COC, CPC-I, CCS-P, is the director of professional coding at Lahey Health Care System, Burlington, Mass. She holds a Bachelor of Arts in Business Administration with a concentration in Health Information Management from Northeastern University Boston. Egbunike has over 10 years of experience in the healthcare areas of management, coding, billing, and revenue cycle. She is a member of the Burlington, Mass., local chapter.

No Responses to “Sequence Anemia in Order of Events”