We’re Vanessa Moldovan and Sherrie Anderson from the Southwest Region. 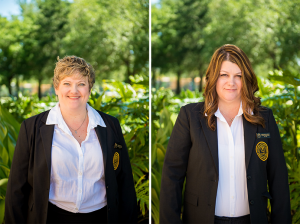 We would like to tell you about us and how our experience will help us benefit the region.
My career in healthcare started more than twenty years ago as a registrar in an emergency room. For about 10 years, I held various healthcare jobs. I knew that I wanted to stay in healthcare, but I just didn’t know what specific direction to take. I really needed a vision. Then in 2008, another significant moment presented itself. pon the recommendation of my trusted mentor, I accepted a professional challenge. My experiences during that journey solidified my professional vision.
My professional vision is to be an advocate for those who are caught up in this crazy health system by default, but aren’t given the tools, resources and/or education to be successful. This could be patients, providers, receptionists, coders, etc. During the years since I established my mission, I have obtained my BA in Healthcare Administration, earned three AAPC certifications, served as a chapter officer, and gained professional experience as a billing manager, internal auditor, account manager, project analyst, revenue cycle manager and chart auditor.
As your Southwestern Region NAB representatives, Sherrie and I are so thrilled and humbled to serve as advocates for the AAPC members. We hope that this introduction will encourage our membership to reach out to us with suggestions, requests and needs so that we can help them succeed!
Sherrie Anderson
I was performing insurance follow up in July 2007. An ambulatory coder position was open for hire. I had always wanted to be a coder, but I felt there would be no way the coding supervisor would pick me. I did not have experience. How would I ever learn this? I reached out to the hiring supervisor. Amy said to me, Take these three books home this weekend. Monday you can take the test and we will talk.” I read the code books and guidelines all weekend. On Monday I took the department’s coding test and I was hired. I became a certified coder with AAPC in June 2011. I knew that I wanted more. I wanted to help others and I immediately volunteered to serve as an officer. Since 2011, I have dedicated time assisting others and mentoring on goals, dreams, hopes.
In January 2018, Mike called and explained I was selected for the role within the Southwest Region. I am excited and read to serve, lead, coach, and mentor current members, as well as members to be. I am also excited to partner, with my region counter-part Vanessa. During Healthcon, getting to know her, I quickly learned we share the same career goals, vision, and we are from the same area within Missouri. Together, we will be dedicated to fulfilling the NAB’s mission.