Speak to a Diverse Audience 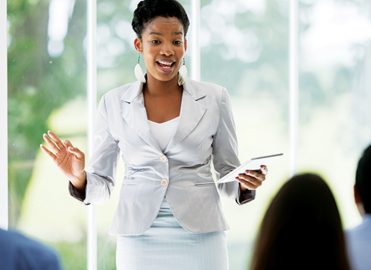 Effective communication requires thinking about what you are saying, as well as how you say it.

Humans are social beings. We constantly find new and improved ways to communicate with each other. It’s a wonder we don’t understand one another better. Even family members suffer communication breakdowns, though, so imagine the chances for miscommunication among a group of strangers. At HEALTHCON, for example, attendees hale from across the country, as well as other countries. With so many regional dialects and social mores in one room, will everyone get your jokes? Will they even understand what you’re saying?
To ensure you come across as intended while speaking to a diverse audience, Toastmasters International — a communication and leadership development organization — offers these six tips.

“If possible, try to speak with a neutral accent to better include all audience members,” Toastmasters says.

How do you “neutralize” an accent? In simple terms: Speak plain English and enunciate your words clearly. This may sound hard, but many of us do it without even thinking: We speak one way to our friends and family, and another way to strangers, teachers, coworkers, etc. No matter how comfortable you are with an audience, speak to them like you would the latter.

“Remember that the normal pace of speech in one language might become incomprehensible for people relatively new to that language,” Toastmaster says.

I have that problem with my teenage daughter. I have no idea what she’s saying half the time because she talks so fast. And we speak the same language, sort of.
Enunciating your words will automatically help you to slow down your speech. This will also give you more time to think before you speak, and we all need to do more of that.

“Some metaphors that are appropriate in one culture can be offensive to another. A good example is references to sports not popular or practiced in a certain country, or phrases that are comical in one culture yet offensive in another,” Toastmaster says.

A metaphor is a figure of speech. Americans use them a lot, but not consistently from one region to another. Here are some well-known metaphors (to me, at least):

Here are some lesser-known metaphors (to me, at least):

To be on the safe side, avoid using metaphors. Most tend to be overused, and you run the risk of sounding like a cliché.

“Unless you are absolutely sure of the meaning and pronunciation of a word you are using in a given language, do not use it. In some languages, slight variations of a vowel will completely alter the meaning of a word,” Toastmaster says.

In other words, “When in doubt, leave it out.”

“Diverse audiences may not understand slang from a given country. English phrases such as ‘that dog don’t hunt’ or ‘cool as a cucumber’ might be colorful, but the meaning could be lost on a large part of the audience,” Toastmaster says.

This applies to audiences from the same country, too. For example, most Americans don’t know what the colloquialism “that dog don’t hunt” means, aside from Texans. (According to the Urban Dictionary, it means, “An obviously faulty endeavor.”)
Colloquialisms are informal words, phrases, or aphorisms that are part of a regional dialect:

Americans also have a habit of using words that have more than one meaning in some regions. For example:

“Posture, mannerisms and eye contact speak volumes and what is taken for granted in one culture might be considered offensive in another,” Toastmaster says.

Avoid using distracting mannerisms, such as pacing, fidgeting, etc., while you’re speaking. To engage the audience, avoid crossing your arms in front of your body (defense mechanism) and face the audience, not the projector screen.
In removing all of the white noise, you will be better able to speak to what the audience understands and wants to hear: the business of healthcare.

Get Off Your Soapbox

There’s another idiom for you! According to the Urban Dictionary, it originated in the days when street preachers would stand on a soap box and give a sermon. Speaking at conference or any other work-related event is not the time to assault others with your personal opinions about matters unrelated to the presentation. Always remember to:

Toastmasters International, “Speaking to Diverse Audiences:” www.toastmasters.org/resources/public-speaking-tips/speaking-to-diverse-audiences
A Big List of Metaphors: www.metaphors.com
Hunt, Kristen, “The Best Regional Slang Words from Around the Country,” Thrillest, July 2, 2015: www.thrillist.com/entertainment/nation/regional-american-slang-yinz-jawn-whoopensocker
Literary Devices, www.literarydevices.com/colloquialism/
“Soda vs. Pop vs. Coke: Who Says What, and Where?” www.huffingtonpost.com/2012/11/12/soda-vs-pop_n_2103764.html
Pop vs Soda survey: http://popvssoda.com/

No Responses to “Speak to a Diverse Audience”