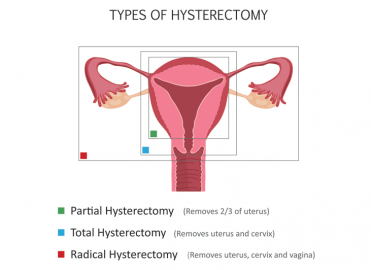 Be sure you know the difference between the various types of laparoscopic hysterectomies.

Note the Difference Between LAVH and TLH

Code selection for a TLH versus a LAVH depends on how the uterine cervix and body are detached from the supporting structures. In a TLH procedure, all structures are detached via the laparoscopic tools/incisions – the removal of the structures can be performed either via the laparoscopic incision or the vagina.
A LAVH procedure does use a laparoscope, but it is used only for the initial part of the procedure as a guidance and visualization tool. An incision into the vagina is used to detach the structures. The removal of the structures must be done vaginally.
According to “Total Laparoscopic Abdominal Hysterectomy and Laparoscopically Assisted Vaginal Hysterectomy,” (American Hospital Association’s (AHA) Coding Clinic for ICD-19-CM, First Quarter 2012, pages 3-4):

The American College of Obstetricians and Gynecologists (ACOG) coding staff has developed laparoscopic hysterectomy charts that summarize the differences in these procedures. The information within the charts is used as a guide for correct coding, and should not be used without a current CPT® code book. The information quoted below, as well as the accompanying coding charts, are from the ACOG website (see Resources section):
In CPT® 2008, the American Medical Association (AMA) published the TLH set of codes (58570-58573). This, in addition to the laparoscopic radical hysterectomy with pelvic lymphadenectomy code (58548 Laparoscopy, surgical, with radical hysterectomy, with bilateral total pelvic lymphadenectomy and para-aortic lymph node sampling (biopsy), with removal of tube(s) and ovary(s), if performed), is the third set of CPT® codes addressing the laparoscopic approach to hysterectomy. The other CPT® code sets are the LAVH (58550-58554) and laparoscopic supracervical hysterectomy (LSH) (58541–58544). Each of the code sets are subdivided into uteri less than or greater than 250 grams and with or without removal of tube(s) and/or ovary(s).
TLH includes laparoscopically detaching the entire uterine cervix and body from the surrounding supporting structures and suturing the vaginal cuff. It includes bivalving, coring, or morcellating the excised tissues, as required. The uterus is then removed through the vagina or abdomen.
LAVH includes laparoscopically detaching the uterine body from the surrounding upper supporting structures. The vaginal portion of the procedure is then performed. The vaginal apex is entered, and the cervix and uterus are detached from the remaining supporting structures. The uterus is then removed through the vagina.

Chart a Course for Proper Coding

Consider the following chart example:
The patient was taken to the OR, where her anesthetic was induced. She was then placed in the dorsal lithotomy position and underwent examination under anesthesia. She was then prepped and draped in the usual manner for vaginal and abdominal surgery. A RUMI intrauterine manipulator with a small Koh ring was placed in the usual manner after the uterus sounded to 9 cm. A Foley catheter was inserted, draining clear yellow urine. A supraumbilical incision was made under 1/2% bupivicaine with epinephrine local anesthesia and a Veress needle placed into the abdominal cavity. Insufflation with CO2 was done in the usual manner. The needle was removed and replaced with a 12 mm port. Laparoscopy was performed with findings as noted above. Two 8 mm robotic ports were placed under direct visualization in the right abdomen, one 8 mm robotic port placed in the left abdomen, and a 10-12 mm port placed also in the left abdomen, all under direct visualization. The patient was now placed in steep Trendelenburg position, and the robot was docked from the patient’s right side. Monopolar Hot Shear scissors were placed in the medial right robotic port, and fenestrated bipolar forceps in the left robotic port. Both ureters were seen coursing over the pelvic brim and along the pelvic sidewalls. The round ligaments were divided bilaterally, opening up the anterior and posterior leaves of the broad ligaments. The peritoneum lateral to the ovarian vessels was opened cephalad bilaterally. The retroperitoneal spaces here were developed. The ovarian vessels were then isolated well above the course of the visible ureter on either side, cauterized with bipolar cautery and divided. The peritoneum was opened anteriorly from the broad ligaments bilaterally down over the lower uterus. The bladder was reflected below the level of the impression of the Koh ring. The uterine vessels bilaterally were skeletonized and cauterized with bipolar cautery. A colpotomy was performed with monopolar cautery over the Koh ring anteriorly and carried around the ring circumferentially. The uterus and adnexae were now removed vaginally. An Asepto bulb was now placed vaginally to maintain pneumoperitoneum. The vaginal cuff was closed with figure of eight sutures of 2-0 PDS on either corner, and then running the cuff between the corners with 2-0 PDS. Both ureters were visualized, were peristalsing, and appeared to be of normal caliber. Irrigation was now employed and hemostasis was found to be excellent. Cystoscopy was performed that showed a normal appearing bladder with good jets of urine from both ureters. The pneumoperitneum pressure was brought down to 5 mm Hg and all sites were hemostatic. The robot was undocked, the ports removed, allowing escape of the pneumoperitneum. The 10/12 mm port site was closed with 4-0 Monocryl in a subcuticular fashion. The 8 mm sites were closed with skin glue. Sterile dressings were applied. The Foley catheter was removed. The patient was taken to the PACU and left in stable condition.
In this case, the use of the Koh ring (uterine manipulator) allows for a laparoscopic colpotomy, which assists with the removal of the uterus and adnexae through the vagina. A uterine manipulator can be used to assist with the laparoscopic portion of the colpotomy procedure. The manipulator assists in providing a safe margin between the ureters and the vaginal fornices by pushing the uterus/vaginal/cervix away from these areas. The laparoscopic instruments are able to make the incisions around the vaginal area while staying away from the ureters and vaginal fornix. A colpotomy performed through the cul-de-sac of Douglas and into the vagina is preferable to a vaginal incision because complete hemostasis is obtained while making the colpotomy incision.

No Responses to “Correct Coding for Laparoscopically Assisted Vaginal Hysterectomy”