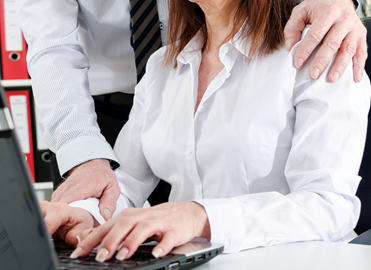 You’d be surprised how common it is in the healthcare industry. Help stop it!

The #MeToo movement brought sexual harassment in the workplace to the attention of the country, and news media covered just how common it is in the Hollywood circuit. Over the past year, we’ve seen how prevalent sexual harassment is as our Facebook friends and family contacts spread #MeToo virally. It’s proved sexual harassment is not just a Hollywood problem; it can happen anywhere, including in the healthcare environment.
Physicians work side by side with clinical staff, all of whom work closely and privately with patients. This creates unique situations and an environment that may lend itself to sexual harassment.

Define Harassment and Its Prevalence in Healthcare

If you are unsure of what harassment is, let’s clarify it as unwanted sexual advances or obscene remarks. Women are most often the target of harassment in the workplace and social situations.
Medscape Medical News published a July 11 report, “Patients Sexually Harassing Physicians Report 2018,” where 27 percent of doctors said they were sexually harassed by patients. The most common forms of harassment were:

Another recent Medscape report, “Sexual Harassment of Physicians: Report 2018,” revealed the number of physicians who experienced some form of sexual abuse, harassment, or misconduct within the past three years:

A poll, “Harassment from Patients Prevalent, Poll Shows,” published in February by Medscape Medical News found that 71 percent of nurses had been harassed by a patient.
In an NBC News article, “For Nurses, Sexual Harassment Is ‘Par for the Course,’” Meghan Justice, an emergency nurse said, “In the ER especially, we’re very hands-on with our patients and physically close to them, and sometimes they’re inebriated, or on drugs, or very ill.” She said it is normal for a patient to expose themselves or “to have her breasts grabbed as she leans over to put in an IV line.”
To compare nurse harassment to other professions, Director of Nursing Practice and Work Environment Seun Ross, MD, at the American Nurses Association, said:

I think sexual harassment in general is probably one of the most persistent problems in the workplace, but in terms of nursing, the lines are blurred because we see patients in their most vulnerable state, some that require patients to get naked, and unfortunately, people take certain liberties that they wouldn’t have, had they been fully clothed.

Because clinical staff are ethically obligated to treat sick patients, addressing harassment from a patient or the harassment of a patient’s family member is more complicated. The usual recourse to stop the harassment, when reported, is to reassign the nurse to a different patient or to send in another staff member with the nurse when she treats the patient.

How Does the AMA Feel About Sexual Harassment?

The American Medical Association (AMA) defines sexual harassment in their Code of Ethics as “unwelcome sexual advances, requests for sexual favors, and other verbal or physical conduct of a sexual nature.” Even if a sexual relationship between a medical supervisor and trainee is consensual, it is still unacceptable the AMA contends. If the involved individuals want to continue their relationship, the supervisory role needs to be eliminated.
Besides being unethical, the AMA explains, sexual harassment is harmful in healthcare because it:

Often when sexual harassment happens, the victim feels powerless. If you are not in immediate physical danger, you can take your power back. For example, I had a harassment situation when I was 21, working as a housekeeper for home healthcare patients. I was assigned to clean a male patient’s apartment who looked 30-35 years old, tall, and muscular. I’m 5 foot 2 inches tall and weighed 105 pounds at the time. The patient had brain damage from a motorcycle accident and was living on his own but needed assistance and had slowed speech.
When I arrived, the patient’s sister was there and they both told me about the motorcycle accident and explained what housekeeping chores needed to be done. She left, and that was when inappropriate conversation started. He followed me around each room as I cleaned, talking about normal everyday things; but he would sneak in uncomfortable, personal questions and throw inappropriate, sexual comments into the mix. I just kept cleaning, changing the subject, and looking at the clock. I was scared.
I should have left then, but I was young and didn’t know I was in a sexual harassment situation. No one talked about it back then. Most importantly, I was afraid I would get fired for leaving my shift early and I needed the job.
When I got to cleaning the bedroom, the patient followed me, laid on the bed, and asked, “Do you want to have fun?” In a terrified but stern voice I said, “No. That’s not my job.”
And with one last attempt in a louder voice, while tapping his hand on the mattress he said, “Come on, don’t you like to have fun?” I replied, “Not that kind of fun.”
I was clear that I was there to work and left the bedroom to clean the next room. He stopped following me around. When my shift was over, I couldn’t get out of there fast enough.
When my dad picked me up, I broke down and told him what had happened. His face dropped, and he said that he was sorry it happened, and that I needed to call my case scheduling manager to tell her as soon as I got home (this was before cell phones).
When I contacted my scheduling manager, she said I would not have to go to that patient’s apartment again and a report would be sent to human resources. The next morning, I received a phone call from my housekeeping manager and she met me at a cleaning location to discuss things with me. She asked me what transpired between the patient and I told her. My manager said, “I think he’s seen too many housekeeper movies, putting ideas in his head.” She told me they talked to him to get his side of the story and that only male housekeepers would be cleaning his apartment to avoid this situation with future female housekeepers.

Don’t Be a Victim

I was lucky; my story could have been much worse. It was no less traumatizing, though. Here’s what I learned:

Take the Power Back

Every harassment situation is different, and what resolved mine may not work in another, especially if there is a physical attack or it involves a threatening manager. What’s important is to do everything possible to stop the harassment, safely, and report it.
AAPC’s Human Resource (HR) Manager Katie Tanner says sexual harassment is one of the most difficult parts of her job. If it happens to you, Tanner said, “Say something! Talk to your manager and talk to HR. Nobody, regardless of your sex, should feel uncomfortable in the work place, or anywhere really; but unless you bring it up, nobody can do anything about it.”
Your HR department is there to be an advocate for employees. “When you do come to talk to someone about harassment, have specifics about the situation as they will need to know what happened,” Tanner said. Don’t fear for your job; you can’t be retaliated against for saying something, she said.
The U.S. Department of Health and Human Services’ (HHS) Anti‐Harassment Policy and Procedures is publicly available to help you properly report and stop the behavior. Their advice:

Know that management cannot guarantee confidentiality or anonymity when investigating a workplace harassment complaint. Management may need to question witnesses and others who need‐to‐know the details involved in the workplace harassment complaint.
Take advantage of work counseling services or other personal counseling services relating to workplace harassment. If you need special accommodations, such as temporary parking or schedule readjusting), request them from management.
Tanner said, “All reports are treated seriously and are investigated, and it is kept as confidential as possible to investigate the situation.” If needed, a third party is asked to handle the situation to avoid any claim of bias, she said.
Employees should help assist supervisors and managers who investigate allegations of workplace harassment and provide interim relief for other employees who allege workplace harassment.
Remember: Reporting sexual harassment is embarrassing, scary, time-consuming, and stressful. It’s traumatizing to relive the harassment each time the victim tells someone about what happened to them. No one wants to put themselves through that, so take accusations and reporting seriously. If you see it happening to someone, report it.
Silence is the catalyst that allows sexual harassment to thrive in the workplace. Speak up!