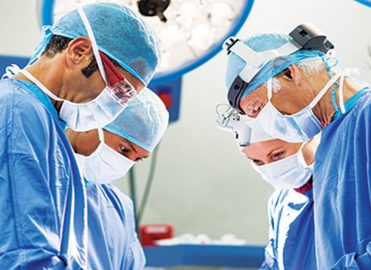 When a surgery calls for more than one surgeon, append the right modifier to capture everyone’s payment.

Complex surgeries may require the efforts of more than a single surgeon. When this occurs, documentation and coding requirements (especially modifier application) become more intricate, as well. Read on to learn the basics for submitting these claims cleanly.

It Really Is About the Modifiers

When more than one surgeon takes part in a surgical service, you’ll need to sel

ect from among five CPT® modifiers and one HCPCS Level II modifier. Each modifier describes a unique circumstance and comes with its own documentation requirements — which may vary, depending on the payer.
Editor’s Note: Coding and documentation advice given in this article apply to Medicare payers, unless otherwise specified. Requirements may differ for non-Medicare payers.
We’ll review each modifier, beginning with two modifiers that describe circumstances when two or more surgeons work independently of one another to perform a single procedure. Then, we will move on to the modifiers that describe two providers working together (one as a primary surgeon, the other as an assistant) to complete a procedure.

When two surgeons work independently to complete a procedure described by a single CPT® code, you should look first to modifier 62 Two surgeons.
The Centers for Medicare & Medicaid Services (CMS) limits the CPT® codes to which modifier 62 may be appended. To determine if a specific code is eligible for Medicare reimbursement with modifier 62, you may reference the Medicare Physician Fee Schedule (MPFS) Relative Value File. Within the file, find the CPT® or HCPCS Level II code that represents the service you wish to report, and tab right to the column labeled “CO-SURG.” If that column contains a “1,” Medicare may allow modifier 62 with the code in question when supporting documentation establishes medical necessity for two surgeons (e.g., the duration of a trauma surgery may require that two surgeons work in shifts). A “2” means Medicare allows modifier 62 with that code if each of the operating surgeons is of a different specialty (i.e., each surgeon brings a different “skill set” to the operating table). Either a “0” or a “9” means Medicare does not allow modifier 62 with that code.
Medicare payers reimburse procedures reported with modifier 62 at 125 percent of the regular fee schedule amount. The payer divides this between the two surgeons, so each surgeon receives 62.5 percent of the standard fee. If either surgeon files their claim incorrectly, however, one or both surgeons could miss out on reimbursement. To avoid this outcome, each surgeon should:

CPT® Assistant (March 2018) provides the following example of modifier 62 application:
Question: When performing a translabyrinthine approach for the resection of a vestibular schwannoma, is it correct to report codes 61595 and 61616, or code 61526?
Answer: This is a cerebellopontine angle (CPA) tumor, and should be reported with code 61526, Craniectomy, bone flap craniotomy, transtemporal (mastoid) for excision of cerebellopontine angle tumor. Code 61526 was established specifically for translabyrinthine vestibular schwannoma removal. If both an otolaryngologist and neurosurgeon worked as a team to perform their respective portions of the procedure, each surgeon would report code 61526 with modifier 62, Two Surgeons, appended. Skull base codes 61595, Transtemporal approach to posterior cranial fossa, jugular foramen or midline skull base, including mastoidectomy, decompression of sigmoid sinus and/or facial nerve, with or without mobilization, and 61616, Resection or excision of neoplastic, vascular or infectious lesion of base of posterior cranial fossa, jugular foramen, foramen magnum, or C1-C3 vertebral bodies; intradural, including dural repair, with or without graft, should not be reported.

Modifier 66: It Takes a Team

Modifier 66 Surgical team applies when three or more surgeons work as a team to complete a surgery defined by a single CPT® code. Each surgeon should act independently to perform a portion of the procedure.
Modifier 66 is used rarely, and as with modifier 62, CMS limits the CPT® codes to which it may be appended. To determine if modifier 66 may be appended to a code, look again to the MPFS Relative Value File. Locate the CPT® or HCPCS Level II code that represents the service you wish to report. If the column labeled “TEAM SURG” contains a “1,” Medicare may allow modifier 66 when supporting documentation establishes medical necessity for a surgical team. A “2” means Medicare will permit modifier 66 with that code if each of the operating surgeons is of a different specialty. A “0” or “9” means you cannot append modifier 66 with that code.
When a team surgery occurs, each surgeon must bill independently, appending modifier 66 to the code that describes the procedure performed. Each surgeon must also report their own operative report, which should establish the surgeon’s distinct portion of the procedure.
Medicare payers determine reimbursement for team surgeries at the time of review, based on the documentation each physician provides.

For example, to report a closure of intestinal cutaneous fistula, the primary operating surgeon reports code 44640, and the assistant surgeon reports 44640-80. For assistant at surgery services performed by a medical doctor, Medicare pays 16 percent of the usual global surgery fee schedule amount.

Modifier 82 Assistant surgeon (when qualified resident surgeon not available) applies only in a teaching hospital. Typically, Medicare does not make separate payment for an assistant surgeon when a surgery is provided in a teaching hospital with a training program related to that surgical procedure because the hospital has been reimbursed for such services already, via its residence funding. There are times, however, when modifier 82 may be appended and separate payment for a surgical assistant may be made:

Medicare does not establish national guidelines regarding the appropriate documentation to support the use of modifier 82, and instead leaves this determination to its fiscal intermediaries (FIs) and Medicare Administrative Contractors (MACs). For more information, see MLN Matters: MM6123 Revised.

Check with Your Payer for Modifier 81

Modifier 81 Minimum assistant surgeon is tricky to apply, at least in part because CPT® doesn’t provide a clear definition of “minimum” in this context. CPT® Assistant (March 1996) provides inconclusive guidance:

At times, while a primary operating physician may plan to perform a surgical procedure alone, during an operation circumstances may arise that require the services of an assistant surgeon for a relatively short time. In this instance, the second surgeon provides minimal assistance, for which he/she reports the surgical procedure code with the – 81 modifier appended.

Some non-Medicare payers may allow modifier 81 for mid-level providers, such as physician assistants (PAs), who act as surgical assistants. Because the rules are inconsistent, ask for your payer’s instructions, in writing, before applying modifier 81.

For Medicare Claims, Use Modifier AS for NPP Assist

When a qualified NPP, rather than a medical doctor, acts as an assistant in the operating room, Medicare requires that you report that assistant’s services using the same CPT® code as the primary surgeon, with HCPCS level II modifier AS Physician assistant, nurse practitioner, or clinical nurse specialist services for assistant at surgery appended.
Modifier AS is limited to use by PAs, nurse practitioners, or clinical nurse specialists. Medicare will not reimburse for surgical assistance by other NPPs, such as registered nurses, orthopedic PAs, licensed practical nurses, and certified surgical technologists. For Medicare, the PA assisting at surgery must have a Medicare (or Medicaid) provider number.
Because modifier AS tells Medicare payers who did the assisting, and not the extent of their assistance; you must append modifier AS in addition to modifier 80, 81, or 82, as appropriate. Per MLN Matters Number: MM6123 Revised, “Be aware that when you use Modifier AS, you must also use Modifier 80, 81, or 82 because using these modifiers without modifier AS indicates that a physician served as the surgical assistant. Claims that you submit with modifier AS and without modifier 80, 81 or 82 will be returned to you.”
If you’re unfamiliar with the Medicare Physician Fee Schedule (MPFS) Relative Value File, you can find an introductory tutorial on AAPC’s Knowledge Center.

Resources
MPFS Relative Value File is updated at least once, per year (and often, multiple times per year), and can be downloaded for free from the CMS website at: www.cms.gov/Medicare/Medicare-Fee-for-Service-Payment/PhysicianFeeSched/PFS-Relative-Value-Files.html
MLN Matters: MM6123 Revised: www.cms.gov/Outreach-and-Education/Medicare-Learning-Network-MLN/MLNMattersArticles/downloads/MM6123.pdf

About John Verhovshek Has 570 Posts