Use terminology, order placement, and coding guidelines to accurately capture these specialized services.

Arterial catheter placement is a ubiquitous part of interventional radiology, cardiology, and endovascular surgery, and affects both facility and physician coding. Because it is such an important part of these specialty procedures, choosing the correct placement codes is essential for accurately capturing the physician’s services, ensuring proper reimbursement, and maintaining compliance.
Learning specific codes for any individual artery is not necessary because there are so many named vessels, and coding can vary for the same vessel depending on the access site, approach to the vessel, and variant anatomy. For example, a superficial femoral artery (SFA) selection is a first order placement for an antegrade approach with an ipsilateral common femoral access but is a third order placement for a contralateral approach (up and over the bifurcation of the aorta).
For a physician to meet the minimum documentation requirement, it’s imperative for the documentation to include all locations used to gain access into the vascular system, all vessels into which the catheter is placed, and the route the catheter took to get to these vessels. Documenting variant anatomy encountered during the procedure also is necessary as this may affect coding.
The following concepts, along with good physician documentation, will allow you to code even the most challenging reports.

To gain a better understanding of arterial system catheter placement coding, familiarize yourself with these key terms.
Vascular access is the location(s) where the patient’s vascular system is entered. The common femoral artery (CFA) and brachial arteries are the most frequently used.
A vascular family is a vessel that arises from the aorta or is off the access vessel, and includes all of that vessel’s branches. For example, the left subclavian artery and its many branches are considered as one vascular family off the aorta.
Non-selective catheter placement refers to a catheter that remains in the accessed vessel or that has made it into the aorta, which is still considered non-selective.
Selective catheter placement is a catheter placed into (not at or near the origin) a branch off the aorta or the access vessel. Each of these vessels arising from the aorta or access vessel represents different vascular families. Code to where the tip of the diagnostic or working catheter is placed, but not the wire. A working catheter could be an angioplasty, atherectomy, or stent catheter.
Vascular order describes the level of a vessel. The initial vessel off the aorta or access vessel is considered a first-order vessel. When this initial vessel starts to branch, it becomes smaller and more difficult to catheterize, with the resulting branches becoming second-order selections. When the second-order vessel starts to bifurcate, the resulting branches become third-order selections, and so on. The highest level of selection in the arterial system is a third-order vessel, so it is not necessary to distinguish higher levels of selection. One main exception is that the popliteal artery becomes the next-higher order beyond the SFA without a bifurcation.

Refer to Table A for code descriptions.

Case 1 – Right transfemoral approach with the right vertebral, right common carotid artery, left common carotid artery, left vertebral arteries selected with normal arch anatomy.
Catheter codes: 36217, 36218, 36215-59, 36216-59
Case 2 – As case 1, but with bovine arch (variant anatomy with left common carotid originating from the brachiocephalic, resulting in only two vascular families arising from the arch instead of the normal three).
Catheter codes: 36217, 36218, 36218, 36216-59
Notice different codes secondary to the variant anatomy.
Case 3 – Right transbrachial approach with the same vessels selected as in case 1.
Catheter codes: 36215-59, 36215-59, 36215-59, 36216-59
Notice different codes for different approach.
Case 4 – Right transfemoral access with the celiac, splenic, gastroduodenal, and superior mesenteric arteries selected.
Catheter codes: 36247, 36248, 36245-59
Remember: The celiac would be included in the third-order selection in the same vascular family.
Case 5 – Left transfemoral with an up-and-over contralateral approach with the right SFA, popliteal, anterior tibial, posterior tibial, and peroneal arteries selected.
Catheter codes: 36247, 36248, 36248
These codes are for the anterior tibial (AT), posterior tibial (PT), and the peroneal arteries. The SFA and popliteal are “along the route” to the highest level selection and are not reported separately. 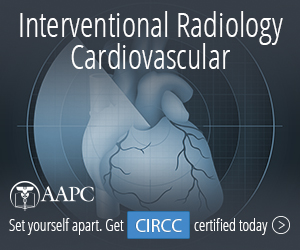 About David Dunn Has 2 Posts