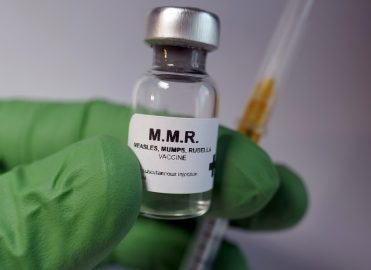 As some technology companies have announced steps to combat the spread of vaccine misinformation, the American Medical Association (AMA) today issued a letter to the CEOs of six of the country’s leading social media and technology companies urging them to ensure their users have access to accurate, timely, scientifically-sound information on vaccines.

At a time when vaccine-preventable diseases, particularly measles, are reemerging in the United States and threatening communities and public health, physicians across the country are troubled by reports of anti-vaccine related messages and advertisements targeting parents searching for vaccine information on your platforms.

The Guardian writes, “Half of all parents with small children have been exposed to misinformation about vaccines on social media, according to a new report that finds the most common reason not to vaccinate is the fear of side-effects.”
In this aforementioned report, published by the Royal Society for Public Health (RSPH) — an independent health education charity located in the United Kingdom — Chief Executive Shirley Cramer writes, “We need to counteract health misinformation online and via social media.” She refers to a tweet by President Trump:

… it is worrying that the anti-vaccination movement in the USA may have gained ground through the US President, Donald Trump, tweeting the belief that vaccination causes autism.

This is the tweet to which Cramer is referring: 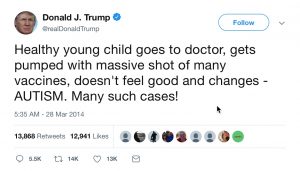 Vaccination Coverage in the U.S.

According to the Centers for Disease Control and Prevention, National Center for Health Statistics’ Health, United States 2017 – Data Finder (Table 66), vaccination coverage for most diseases among children aged 19-35 months has increased over the years, but there has been a slight downturn. For example, the report shows that 44.3 percent of children in this age range received the combined seven-vaccine series in 2009 compared to 70.7 in 2016 — that’s a significant increase, but it’s down 2.5 percentage points from 2015. Also, the measles, mumps, and rubella vaccination, which has been consistently popular, has gone from 92.0 percent in 1998 to 91.1 percent in 2016 (most current data available).
Historical data show that vaccination coverage rates fluctuate, so it may be too soon to say there is a definite trend for people not to get their children vaccinated.