Consider Depth and Other Factors when Coding for Burns 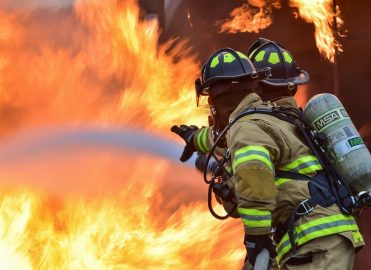 The more familiar you are with burn injuries and documentation, the easier it is to code the cases.

Burn coding is challenging and requires you to consider multiple factors. Proper coding and documentation require an understanding of the types of burns, estimating burn extent based on age, and being familiar with how this estimation varies when coding for ICD-10-CM or CPT®.
Approximately every minute, someone in the United States sustains a burn injury serious enough to require treatment. According to the American Burn Association, an estimated 486,000 hospital admissions and visits to hospital emergency departments occur annually for burn evaluation and treatment in the United States. This statistic does not account for burn injuries treated in hospital clinics, private medical offices, or community health centers. The likelihood for a medical coder to code a burn case is extremely high. Here’s what you need to know.

How do you Define a Burn?

A burn is tissue damage with partial or complete destruction of the skin caused by heat, chemicals, electricity, sunlight, or nuclear radiation. Scalds from hot liquids and steam, building fires, and flammable liquids and gases are the most common causes of burns. Inhalation injury, another type of burn, results from breathing smoke. Keep in mind, ICD-10-CM differentiates between burns and corrosions; however, the ICD-10-CM guidelines are the same for both.

Burns are defined by how deep they are and how large an area they cover. A large burn injury is likely to include burned areas of different depths. Deep burns heal more slowly, are more difficult to treat, and are prone to complications such as infections and scarring.

Burn severity is classified based on the depth of the burn. There are six degrees of burns (see Figure 1 for corresponding skin depth): 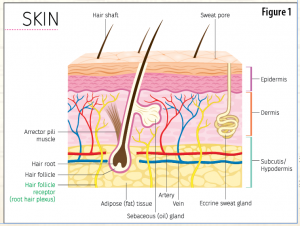 Many patients suffer from burns in multiple anatomical locations. When coding these cases:

Code Using the Rule of Nines

ICD-10-CM guidelines recommend reporting appropriate external cause codes for burn patients. Not all payers accept these codes, however. 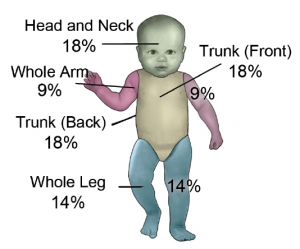 Rule of Nines for infants 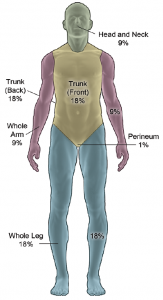 Rule of Nines for adults

Codes to report local treatment of burns, and many skin grafting procedure codes, specify the TBSA treated. CPT® utilizes the more precise Lund-Browder classification method to calculate TBSA for burns and grafts. Lund-Browder divides the body into 19 distinct areas and specifies six different age groups to account for the changes in body composition during development into adulthood.
The CPT® code book contains a Lund-Browder classification method chart, as shown in Table 1, for easy TBSA calculation by body area and patient age.

Determining a CPT® code for burn treatment requires documentation of the degree of the burn and the percentage of body area affected. Documenting what is done during the visit is important because burn coding can be used for a dressing change or debridement.
Typical CPT® procedure codes include:
16000     Initial treatment, first degree burn, when no more than local treatment is required
16020     Dressings and/or debridement of partial-thickness burns, initial or subsequent; small (less than 5% total body surface area)
16025                  medium (e.g., whole face or whole extremity, or 5% to 10% of total body surface area)
16030                  large (e.g., more than 1 extremity, or greater than 10% of total body surface area)
Note: CPT® code 16000 is for initial treatment of first-degree burns only, whereas codes 16020, 16025, and 16030 are for initial and subsequent visits for treatment of second- and third-degree burns.
Burn treatment codes can be used in addition to an office visit; however, the office visit must be medically necessary and modifier 25 Significant, separately identifiable evaluation and management service by the same physician other qualified health care professional on the same day of the procedure or other service must be appended to the office visit. A separate, medically necessary office visit might occur; for example, to prescribe medications such as topical ointments, antibiotics, and pain medications.
Let’s apply these rules with a case scenario:
Example: A 35 y/o cook presents with a second-degree burn to the front of the left forearm, first-degree burns to multiple sites on the anterior head, face, and neck, and a third-degree burn of the anterior chest from bubbling hot oil. He states he was preparing one of his signature dishes and accidentally poured too much cooking oil into the hot skillet, which splashed up and burned him. This is his first visit for evaluation of his burns. Debridement and dressings were applied to the areas affected by second- and third-degree burns.
Always sequence first the diagnosis code that reflects the highest degree of burn: T21.31XA Burn of third degree of chest wall, initial encounter, T22.212A Burn of second degree of left forearm, initial encounter, T20.19XA Burn of first degree of multiple sites of head, face, and neck, initial encounter.
For extent, add up the anterior left arm (4.5 percent), anterior head and neck (4.5 percent), and anterior trunk (18 percent), which makes the TBSA burned 27 percent using the rule of nines. The fourth digit of the code indicates TBSA (27 percent) and the fifth digit indicates the percentage of the body that has received third-degree burns (18 percent), so the code indicating extent is T31.21 Burns involving 20-29% of body surface with 10-19% third degree burns.
Lastly, external cause codes are: X10.2XXA Contact with fats and cooking oils, initial encounter and Y92.511 Restaurant or cafe as the place of occurrence of the external cause.
For coding the treatment, Lund-Browder Classification estimates the total burn area to be treated at 16 percent, including the partial thickness, left forearm burn (3 percent) and the full thickness anterior chest burn (13 percent). The first-degree burn will be erythematous but will not require anything more than local treatment. CPT® code 16030 indicates dressings and/or debridement of a large burn (e.g., more than 1 extremity, or greater than 10 percent TBSA).

About Stacy Chaplain Has 124 Posts