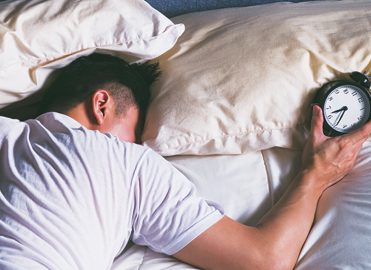 You can rest assured that when you break procedure
codes into groups, it’s easier to compare and apply proper codes.

Sleep medicine is a sub-specialty of neurology, which can seem very daunting to coders and physicians due to technicalities in the guidelines and procedure code descriptions. The good news is that code selection is simple when like codes are grouped together and compared by elements.
Procedure codes for sleep medicine are contained in CPT® code range 95803-95783 and HCPCS Level II code range G0398-G0399. These code sets can be categorized further by type: miscellaneous sleep diagnostic testing, home sleep study tests, sleep studies, and polysomnographies.

There are two different, miscellaneous sleep diagnostic tests that can be performed.
The first test is:
95803     Actigraphy testing, recording, analysis, interpretation, and report (minimum of 72 hours to 14 consecutive days of recording)
For this test, patients are given an actigraph device to wear on the wrist in the home setting. The actigraph device records sleep and movements over three to 14 days. Once the device is returned to the provider’s office, the data can be downloaded to a computer and analyzed by specialized software to assist in the evaluation or monitoring of sleep disorders such as circadian rhythm disorders and sleep-disordered breathing.
The second test is:
95805     Multiple sleep latency or maintenance of wakefulness testing, recording, analysis and interpretation of physiological measurements of sleep during multiple trials to assess sleepiness
Multiple sleep latency testing consists of four or five short nap opportunities in the office setting that are set a few hours apart. The patient’s brain waves, muscle activity, and eye movements are monitored and recorded during these nap sessions. That data can be used to diagnose narcolepsy and excessive daytime sleepiness, as well as assess the efficacy of treatments for breathing disorders. If fewer than four nap opportunities are recorded, append modifier 52 Reduced services. 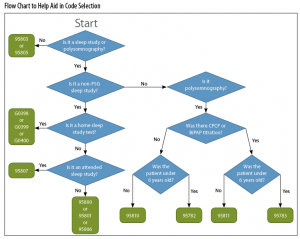 Patient: Jane Doe
DOB: 12/6/1952
Polysomnographic findings:
During all-night polysomnography, the patient slept for 332 minutes out of 510 minutes in bed. Lights out occurred at 22:00 and lights on occurred at 06:30. Sleep latency was 128 minutes and REM latency was 116 minutes.
Respiratory monitoring using nasal/oral thermistor, pressure transducer, and respiratory inductance plethysmography belts revealed a respiratory disturbance index (RDI), apnea-hypopnea index (AHI), and central apnea index (CAI) of 0.0 events per hour of sleep. There were 0.0 respiratory events per hour of NREM and REM sleep.
During NREM sleep, the baseline SpO2 average range was 95-96%. During REM sleep, the baseline SpO2 average range was 95-97%. During the study, transcutaneous CO2 levels were observed to rise to 51-52 mm Hg.
The snoring microphone and technician observation revealed absent snores. EMG monitoring of the tibialis anterior muscle revealed 0.0 periodic leg movements per hour of sleep. EKG monitoring revealed a normal sinus rhythm.
Report this service using 95810 because it is a polysomnography with more than four parameters (respiration, oximetry, muscle activity, vital signs, and snoring), no titration was initiated, and the patient is older than 6 years old. Do not append modifier 52 because the total recording time was greater than six hours.

About the author:
Victoria Wheeler, CPC, CPPM, is the coding supervisor in the Department of Neurology at Washington University School of Medicine. She is a member of St. Louis East, Mo., local chapter.