Bone Up on Lumbar Spinal Fusion 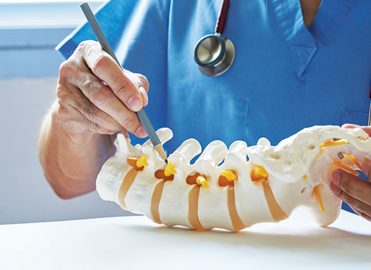 Whereas, ICD-10-PCS divides the spine into two columns:

Anatomical distinctions aren’t the only differences between the two codes sets: CPT® and ICD-10-PCS have very different code structures, as well. Let’s explore coding lumbar spinal fusion performed in the inpatient setting using ICD-10-PCS.
Editor’s Note:  “Bone Up on Lumbar Spinal Fusion: Part 1” in the September issue of Healthcare Business Monthly focuses on spinal anatomy and is a prerequisite to this article. 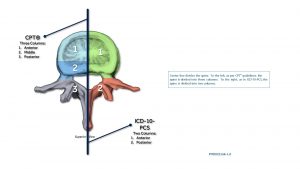 While one five-digit CPT® code can capture several, if not all, portions of a complex surgical procedure, ICD-10-PCS codes are built character by character to capture the specifics of the procedure. The procedural coding system has a logical, consistent structure that enables you to build a code one character at a time using code tables. These tables contain the details of the procedure such as specific features of the lumbar anatomy, biomechanics, and common spine surgery approaches.

ICD-10-PCS is divided into 16 sections. All codes are seven characters long and one of 34 values can be assigned to each character in a code – numbers 0 – 9 or letters A – Z (except the letters I and O, to avoid confusion with numerals 1 and 0). A code is derived by choosing a specific value for each of the seven characters, as shown in Table A, based on the details of the procedure performed.
Table A

Imagine visiting a large library with books on every possible medical procedure in the world. ICD-10-PCS isn’t so different. When building a code using ICD-10-PCS, the first three characters are most important — use them (like you would use the Dewey Decimal System in a library) to locate the correct code table containing the fourth through seventh characters of the code. Here’s how to break it down:

Character 1: Begin with the Section. Lumbar fusion is a surgical procedure, which falls under the Medical and Surgical section of the code set, denoted by the number “0.”

Character 2: Next is the Body System. The lumbar spine falls under “Lower Joints” in ICD-10-PCS, which is assigned to the letter “S.”

This brings you to the right “book,” but now you must delve deeper to find the remaining four characters to complete the code. That’s where the 0SG code table (Table B) comes in. Using this table, select the appropriate fourth character (Body Part), fifth character (Approach), sixth character (Device), and seventh character (Qualifier) based on the details of the procedure.
Table B

*Remember, the letter “O” does not appear in the ICD-10-PCS tables, so the table above includes only zeros for any of the code values.
**Bone graft or bone graft substitute is required to constitute fusion and not just insertion of instrumentation/hardware; however, there is a Z value (No Device) for the fifth character (Device) in the 0SG table. This contradicts the requirement that bone graft or bone graft substitute be performed to constitute fusion, so the ICD-10 Coordination and Maintenance Committee intends to delete value “Z-No Device” from the table in future iterations of the code set.
Notice the term “Approach” is in Table B multiple times. There is a distinction between the fifth character, Approach, and the seventh character, Qualifier, in which the approaches to the lumbar spine are listed. The fifth character (Approach) in the 0SG table represents the invasiveness of the procedure: open, percutaneous, or percutaneous endoscopic. The seventh character (Qualifier) denotes the anatomical entry point used to access the spinal column (i.e., anterior or posterior), and the portion of the spinal column being fused (i.e., anterior column or posterior column). The first portion of the Qualifier does indicate the surgical approach, but do not confuse that with the fifth character (Approach). See Figure 2 for more information.
ICD-10-PCS further clarifies the distinction between the options for the fifth character (Approach) in Appendix A: Components of the Medical and Surgical Approach Definitions (see Table C).
Table C

The difference between Approach value (3) Percutaneous and Approach value (4) Percutaneous Endoscopic is whether visualization via an endoscope is employed.
The other appendices in the ICD-10-PCS code book clarify definitions and device values. Note, however, the appendices may differ from publisher to publisher, and ICD-10-PCS Expert editions may include more appendices than others. Some appendices common among them all include Root Operations definitions, the Body Part key, the Device key, and the Device Aggregation tables.
The Body Part key provides guidance on which anatomical description or site should be coded when the site in the documentation doesn’t appear in the table you’re referencing. For example, the iliac crest doesn’t have its own specific value in ICD-10-PCS, but the Body Part key identifies the pelvic bone as the closest proximal value you can code.
The Device key and Device Aggregation table help you find which value to report for a specific device or type of device. For example, looking up “Interbody fusion (spine) cage” instructs you to select ICD-10-PCS Device Value (sixth character) Interbody Fusion Device in Upper Joints or Interbody Fusion Device in Lower Joints.

CPT® coding focuses most often on the what, while ICD-10-PCS focuses more on the why. For instance, neuroforaminal decompression is the removal of certain portions of the vertebra that are entrapping a nerve root. The CPT® code for this is selected based on what specific areas of the vertebra are removed (e.g., foraminotomy, facetectomy, laminotomy, or all three combined, etc.) and to what extent (e.g., hemilaminectomy versus full laminectomy). The CPT® code represents exactly what the surgeon did during the procedure. In ICD-10-PCS, neuroforaminal decompression is coded with the root operation of Release because its intent is to surgically release an entrapped nerve root (i.e., why the surgeon performed the procedure, and not what the surgeon did to release the entrapped nerve root). Spinal instrumentation hardware is coded separately in CPT®, but fixation is integral to the intent of the fusion procedure, so it’s already included in the root operation Fusion in ICD-10-PCS.
A single ICD-10-PCS code may not fully represent an entire spinal surgery, however. If the surgeon harvests bone graft from the patient’s iliac crest to use in the spinal fusion, that’s represented by another ICD-10-PCS code because the intent of that portion of the procedure is bone excision. A single code is insufficient if both columns of the spine are fused because a different qualifier (seventh character) is required for the second column fused, necessitating a second code. If more than one vertebral joint is fused in a single procedure, and the second (or more) joint has a different device (sixth character) or qualifier (seventh character), another code is needed for each different device/qualifier.

Coding for lumbar spinal fusion in ICD-10-PCS can be quite simple when you have all the facts. You must understand the anatomy and you must begin with a focus on the intent of each procedure (or portion of the procedure). This information enables you to confirm the approach used to access the spine, the column(s) of the spine being fused, and the device(s) used.
Review the accompanying Case Study for a lumbar spinal fusion to test drive your new ICD-10-PCS coding skills. After the case study are recommended codes and references to the specific ICD-10-PCS guidelines that direct each code choice.

A patient with Degenerative Disc Disease, spinal stenosis, and instability at L2-L5 presents for spinal fusion. The patient was placed in prone position on the operating room table after induction of anesthesia. The appropriate levels were identified, and the lumbar spine was then prepped and draped. A midline incision was made and extended down through the skin, subcutaneous tissue, and fascia exposing the posterior elements of L2-L5. Pedicle screws were placed bilaterally at L2, L3, L4, & L5. Complete bilateral excision of lamina was performed on L4. Bilateral foraminotomies and facetectomies were also performed to ensure the nerve roots were freely movable/decompressed. Distraction was then carried out across the disc space of L4-L5. The dura was retracted medially, and the disc was completely removed. The endplates were decorticated, and a PEEK interbody fusion device packed with bone graft harvested from the laminectomy was placed in the interbody space of L4-L5. The transverse processes of L2-L5 were decorticated. Local bone and morselized allograft were placed in the posterolateral gutters. Rods were placed at L2-L5. The posterior lumbar spine was then closed in layers.

(Sources: ICD-10-PCS guideline B3.9; ICD-10-PCS Body Key (identifies pelvic bone as the closest proximal value for the iliac crest, which doesn’t have its own distinct value in ICD-10-PCS.))

One Response to “Bone Up on Lumbar Spinal Fusion”