Words Are Important in Oncology Coding 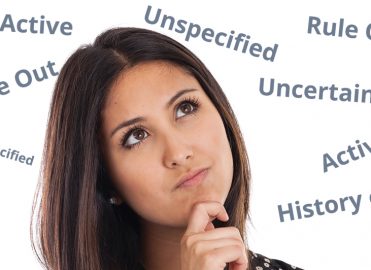 Understand what the physician is documenting to improve coding accuracy.

Since the beginning of grade school, we are encouraged to expand our vocabulary, read literature, and improve our grammar. We quickly learn that spelling words correctly and knowing their definitions is key to comprehension. This level of understanding is extremely important in coding, as well, as every aspect of ICD-10-CM coding affects the patient, physician, and payer. It’s our job as coders to understand what everyone is saying and code it as such. Let’s look at how our words affect coding oncology claims.

Active vs. History Of

Many medical terms are similar, some words may have multiple meanings, and other words can change the ICD-10 code from “active” to “history of.” When coding for malignancy it’s important to know if the malignancy is active or if it’s a history of. Terms that will help you determine status include:

Current: Active treatment is occurring for the purpose of curing or palliating cancer.

History: Cancer-free state with no evidence of disease and no treatment occurring.

Watch and wait: Closely monitoring a patient without treatment unless symptoms begin occurring.

If it’s noted in a chart that the patient has stage IV cancer with malignancy, it’s time to become an investigator and read through the chart to determine:

If the patient stopped treatment, the malignancy was not removed, the mass was debulked, or the patient is receiving adjuvant treatment, then the stage IV malignancy diagnosis is current/active. If there are new secondary cancers, then this is metastasis, and these are also active.

If the patient completed all the treatments that were ordered by the physician and the malignancy was removed, then it’s coded as history of. According to Medicare guidelines, the diagnosis of history of malignancy occurs if the primary malignancy has been eradicated, no further treatment is being directed at the site, and there is no evidence of existing primary malignancy.

Another example of active or history of is when the patient is noted to have stage IV neuroendocrine cancer of pancreas with metastasis to the liver. If the patient is in remission and doing well, with only fatigue and intermittent abdominal pain, the codes for the malignancies would be:

The patient still has the diseases, but they are in remission, still present in the body, but not actively treated at present.

Outpatient coders need to be particularly vigilant to catch words in documentation that indicate the diagnosis is not confirmed. Words such as:

These are all uncertain words that do not qualify the diagnosis. When any of these words are used, code only the symptoms (for outpatient coding; inpatient guidelines differ). For example, if the provider writes, “The patient’s mass is likely malignant lung cancer,” you must code a mass until a definitive diagnosis is made.

Note that “mass” is not always a neoplastic growth. The physician may also use the term “lump.” These are not to be coded from the Neoplasm table unless the provider gives a more definitive diagnosis. Usually with a mass or lump the coder is diverted to “disease.”

When coding for a mass, the mass cannot be listed as malignant, benign, uncertain behavior, or unspecified behavior:

The use of words, in all aspects of our lives, is always important. With ICD-10-CM coding, it can mean the difference for the patient’s diagnosis on charts, reimbursement for physicians and facilities, and accuracy in our work as coders.

2 Responses to “Words Are Important in Oncology Coding”