Menu
Log in
You are using an out of date browser. It may not display this or other websites correctly.
You should upgrade or use an alternative browser.

I have a question about infusion coding. The MAR has the following (I made the chart to make it easy to read): 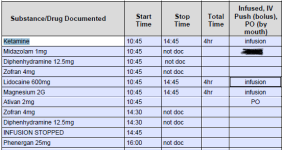 I am confused on how to code it. The initial would be the Ketamine 96365 x 1, 96366 x 3
There is not enough information in the chart note to indicate if the lido and mag were in a separate bag, same bag, not sure if I should allow concurrent.
Since there is not stop time for the other meds they would be considered IV push, but what about the ones with same start time as initial service?
Any help would be greatly appreciated.
T

It is confusing when the documentation isn't clear. Knowing whether or not the drugs were in the same or separate bags should not affect coding, but you do need to know if all of the infusions were administered through the same IV or through separate lines, and you do need stop times. .

If possible, I would start by having a conversation with the nursing staff responsible for doing the documentation to get clarification from them on what they are doing, but also to let them know the coding difficulties you fact without clear documentation of stop times or of whether the drugs are being administered concurrently through the same line or separately through a different access.

Your organization may want to consider creating a written policy on how you will code in these situation. I've worked with one facility that would code a push in the event that an IV start time was documented without a stop time, but I've also worked with one that would not code the infusion at all unless both start and stop times were documented. So I think it's up to you to decide which is appropriate, but again, I'd start with trying to get a better understanding from the nursing staff as to what actually is happening in situations where they're documenting like this.
T

Thank you Thomas. It is through one IV line. I am not able to talk to the nursing staff. I am coding from the insurers prospective on whether the documentation supports the billing. We do not a separate policy in this case, we go off CPT.
T

tmorgan808 said:
Thank you Thomas. It is through one IV line. I am not able to talk to the nursing staff. I am coding from the insurers prospective on whether the documentation supports the billing. We do not a separate policy in this case, we go off CPT.
Click to expand...

If going by CPT and just based on the documentation you've shared, I'd code the 96365, 96366 X 3 for the Ketamine, plus the 96368 for the concurrent infusions of the Lidocaine/Magnesium. For the other drugs, there's no route specified and no stop times, so I would consider them unsupported.
N

A 96367 would be assigned when separate meds are infused and a different start/stop time which don't overlap the initial infusion.
T

If the Midazolam, Diphenhydramine, Zofran, and Phenergan were given IV, but not stop time, would it be appropriate to allow IV push 96375?
T

tmorgan808 said:
If the Midazolam, Diphenhydramine, Zofran, and Phenergan were given IV, but not stop time, would it be appropriate to allow IV push 96375?
Click to expand...

That would be a judgment call. If you're going to give the provider credit for having given the medication IV, then the 96375 would be the code to use since there isn't a time requirement and that is the minimum value code that could have been billed. But if you're going to be strict, then without a documented stop time you don't have sufficient information to be able to determine which code is actually correct.

It's a similar situation to a excision of a lesion, for example, where the provider hasn't documented the size. Some coders or auditors will allow the lowest code for the smallest size lesion, whereas others would consider the documentation deficient for any code assignment.
A

I have a question about infusions also. Can you tell me how you would code this based off this documentation?